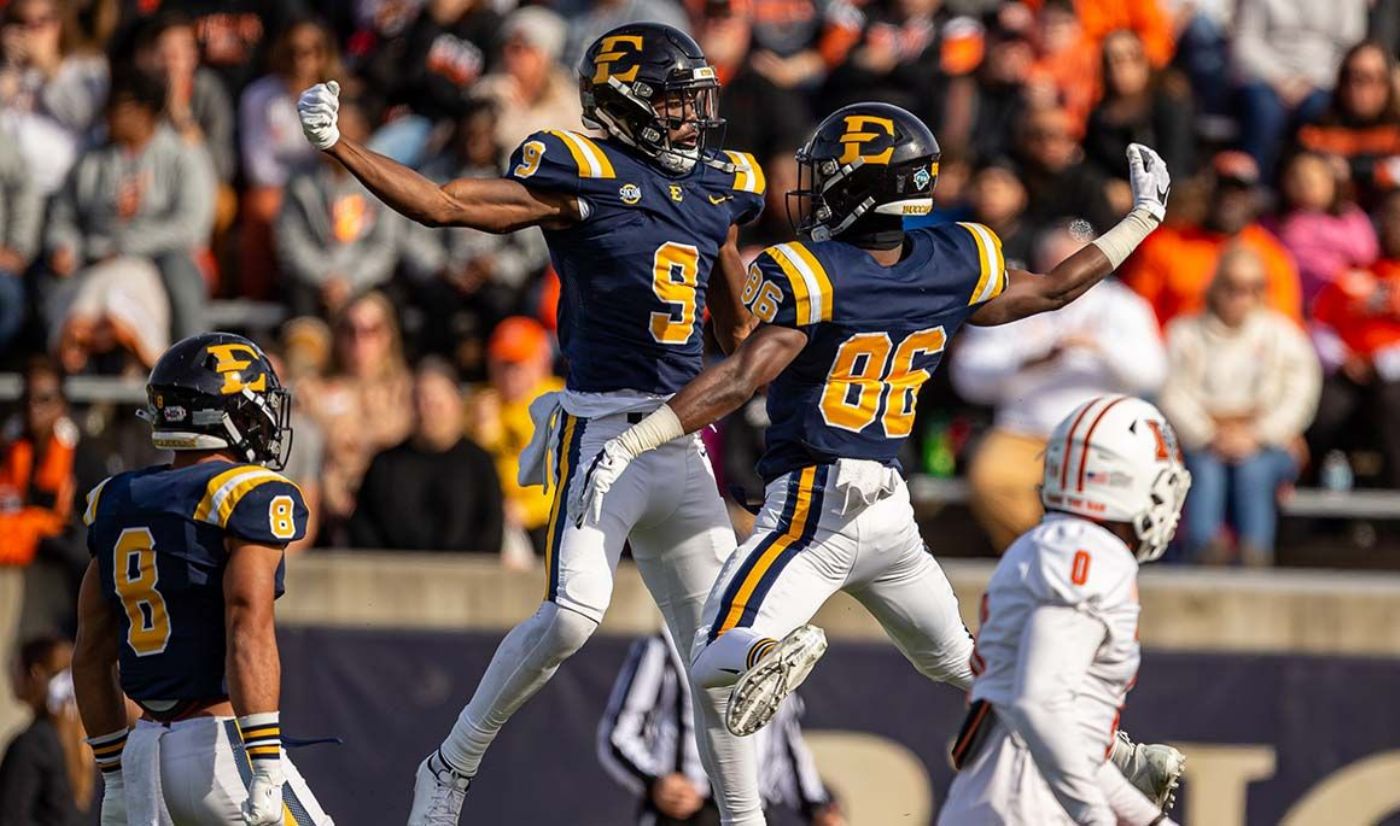 JOHNSON CITY, Tenn. (Dec. 3, 2021) – It is playoff football and the Bucs are set to host Kennesaw State in the first playoff game at William B. Greene, Jr. Stadium. The rivalry will be renewed on Saturday as the two foes take the gridiron at 2 p.m.

Kings of the Conference
The Bucs were crowned Kings of the SoCon on Nov. 20 after winning the de facto Southern Conference title game with a 38-35 victory over Mercer. The victory over the Bears earned ETSU its first-ever outright SoCon title and the second league title in the Randy Sanders era - the Bucs also captured a share of the 2018 SoCon title. With the win, ETSU captured its fifth conference title in program history - including the Ohio Valley in 1969, sharing the OVC title in 1962 and winning the Smoky Mountain Conference in 1938. ETSU captured the league title after posting a 7-1 mark in SoCon play, dropping Mercer to 6-2 and eliminating the Bears from postseason play, much like the Bears eliminated the Bucs in the spring season.

Circle of Life
There is no better story on Saturday than that of the Bucs and Owls in the second round of the FCS playoffs. In 2015, Kennesaw State kicked off its first-ever season of football against the Bucs - a team that was making its reappearance in the football realm after a 12-year hiatus. The Owls came out on top with a convincing 56-16 win over ETSU at Kermit Tipton Stadium on the campus of Science Hill High School in Johnson City, Tenn. The Bucs returned the favor the next season to kick off the 2016 campaign, clipping the Owls in overtime by the final score of 20-17 in Kennesaw, Georgia. What appeared to be a growing rivalry simply faded as the two squads have not faced each other since 2016. However, all that is about to change with Kennesaw State arriving in town to take on the Bucs in the first-ever playoff game played inside William B. Greene, Jr. Stadium - the home to Buccaneer Football!

Well Represented
ETSU was well represented in the All-SoCon category with 22 total honorees between the coaches and media ballot. In addition, ETSU took home some individual hardware as Quay Holmes earned the title of SoCon Offensive Player of the Year and Head Coach Randy Sanders earning the SoCon Coach of the Year for the second time in four years. Four different Bucs were named to both the Coaches and Media First Team: Quay Holmes, Tre’mond Shorts, Donovan Manuel and Tyree Robinson. Meanwhile, Jared Folks earned a spot on the First Team (Coaches) and the Second Team (Media). Jacob Saylors, Tavon Matthews, Nate Adkins, Mike Price and Tyler Keltner all earned spots on the All-SoCon Second Team. The honorees were rounded out by Zion Alexander (All-Freshman), Alijah Huzzie (Media Second Team) and Chandlor Mullins (Media First Team).

Postseason Journeys
ETSU is 2-2 all-time in the postseason, beginning with the biggest win in program history in 1969 with a 34-14 win over Terry Bradshaw and the Louisiana Tech Bulldogs in the Grantland Rice Bowl, completing the undefeated 10-0-1 season. Fast forward to 1996 when ETSU made its first appearance in the NCAA I-AA playoffs, opening the first round with a 35-29 win over Villanova in Johnson City, Tenn. The Bucs then dropped a 44-14 decision at Montana the following week. The Bucs last appearance in the playoffs came in 2018 when ETSU traveled to Jacksonville State, suffering a narrow 34-27 loss in the opening round.

Don’t Give a Hoot
Kennesaw State arrives in Johnson City as one of the hotter teams in FCS football with an 11-1 overall record. The Owls are fresh off a dominating 48-21 win over Davidson in the opening round on Nov. 27 in Kennesaw, Ga. The Owls were a perfect 7-0 in Big South play this fall and finished 5-1 on the road. Kennesaw State is led by quarterback Xavier Shepherd who is the FCS leader in rushing touchdowns with 23 and has also thrown for 1,296 yards and 15 touchdowns. The Owls lead FCS in 4th-down conversion (.815) and redzone defense (.548). Kennesaw State also boast the nation’s second-best rushing attack at 277.9 yards per game. The Owls are also 15th in rushing yards allowed, yielding just 108.9 yards on the ground per game. Evan Thompson anchors the team in tackles with a total of 107, boasting 67 more tackles than his nearest teammate.

Series History
The all-time series between these two competitors is brief but meaningful. ETSU and Kennesaw State are deadlocked at 1-1 in the series with Kennesaw State claiming the first battle by the final of 56-16 in 2015. The Bucs claimed revenge the next season with a 20-17 double overtime win at Kennesaw State in 2016.

The broadcast team of Jay Sandos, color analyst Matt Wihljelm and sideline Kevin Brown, along with studio hosts Mike Gallagher and Don Helman will provide ETSU fans all the information they need to complement their game-day activities.

Saturday’s game will be broadcast on ESPN+ with the team of Michael Reghi (play-by-play) and Je’Rod Cherry (analyst) providing the call this weekend.