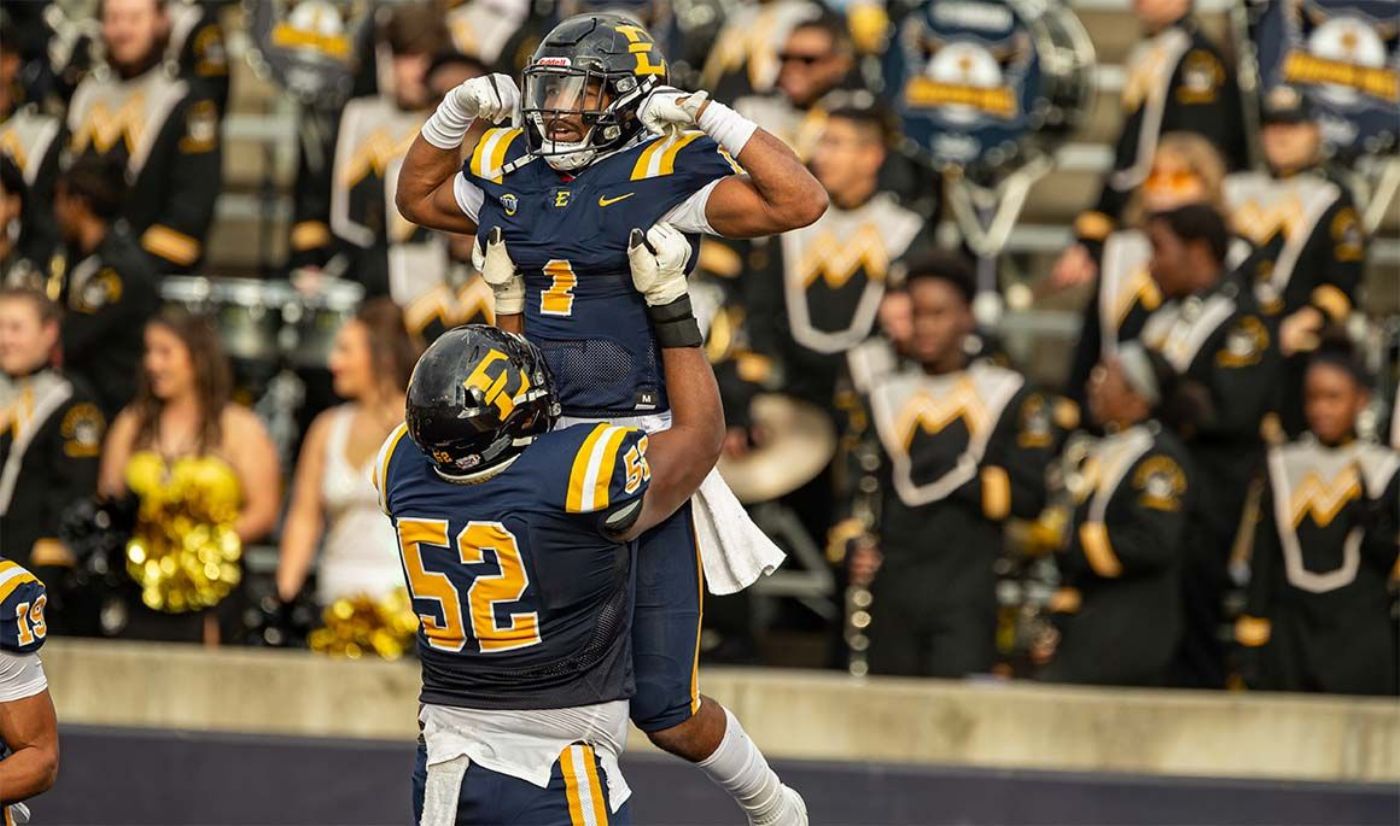 ETSU converts two-point conversion to walk away with win

JOHNSON CITY, Tenn. (Dec. 4, 2021) – For the fifth time this season, the ETSU Football team pulled off a fourth quarter comeback to snatch a victory from the jaws of defeat. This time it came on the biggest stage, the FCS Playoffs!

Trailing by two touchdowns with 1:28 left in the fourth quarter, the Bucs had the Owls right where they wanted. Tyler Riddell (Tampa, Fla.) dropped back in the pocket and delivered a 12-yard strike to Will Huzzie (Duluth, Ga.) to pull the Bucs within seven points, 31-24. The very next play bounced the Buccaneers way as Tyler Keltner (Tallahassee, Fla.) pulled off the perfect onside kick, recovered by Tim Stayskal (Nolensville, Tenn.). Five plays later, Riddell found Quay Holmes (Powder Springs, Ga.) in the back of the endzone for a four-yard touchdown to bring ETSU within one. Head Coach Randy Sanders opted to leave the offense on the field to go for the win, a decision that will live forever near the top of Buccaneer Football history. Riddell calmly dropped back in the pocket and found the sure hands of Nate Adkins (Knoxville, Tenn.) to put the Blue & Gold on top, 32-31. It was all but over after that with the Buccaneer defense stalling the Owls for the one-point, historic victory.

The offense delivered when it mattered most and was led by Holmes with 182 all-purpose yards, racking up 87 yards rushing and 95 yards receiving with three combined touchdowns. Adkins added a career game with seven receptions and 94 yards. In fact, the final two drives, Adkins hauled in five receptions for 71 yards and added the two-point conversion. Riddell concluded the game with 238 passing yards and three touchdowns, the third time this season that the Florida product has tossed three touchdowns.

The defensive unit was led by none other than Jared Folks (Harrisburg, Pa.) and Donovan Manuel (Ellenwood, Ga.) who combined for 28 tackles on the afternoon. Manuel also forced one fumble prior to the conclusion of the second half with Zach West (Boone, N.C.) coming up with the loose ball. West added a career high nine tackles as well.

UP NEXT
The Bucs will travel to Fargo, N.D. to take on North Dakota State in the FCS Quarterfinals. No kickoff time or date for the game has officially been set.