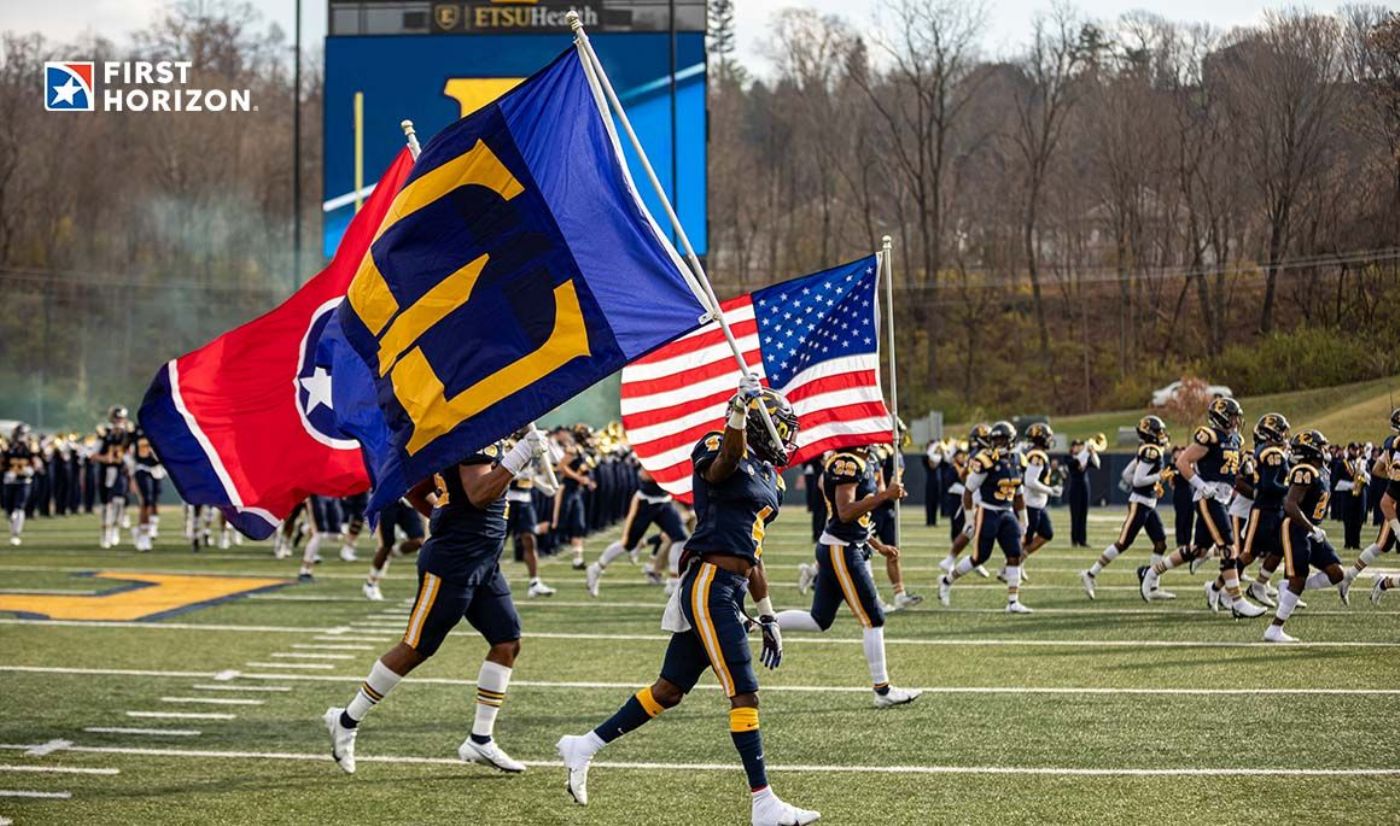 ETSU set for trip to Fargodome

FARGO, N.D. (Dec. 10, 2021) – The stage is set for another Buccaneer playoff game as the 7th-seeded Bucs travel to Fargo, N.D. to square off against FCS powerhouse and 2nd-seeded Bison of North Dakota State. ETSU and NDSU will kick off at noon (ET) on ESPN inside the Fargodome.

Wild Finish
ETSU completed a comeback for the ages in the FCS Second Round, defeating Kennesaw State by the final of 32-31. The Bucs trailed 31-17 with 1:28 remaining in the fourth quarter. The Bucs are known for close games and have become accustomed to the pressure of one-possession games, having competed in 28 games decided by seven or less - including seven this year. The 7th-seeded Bucs had the Owls right where they wanted them as Tyler Riddell found Will Huzzie for a 12-yard touchdown to cut the deficit in half. After recovering an onside kick, the Bucs drove the remaining 48 yards to breathe new life into the hopes of continuing the season. With 35 ticks left on the clock, Riddell found Quay Holmes in the back of the endzone to make it a 31-30 hole for the Blue & Gold. ETSU opted to go for two, a decision that will forever live in Buccaneer history as one of the greatest, gutsiest calls. Riddell slung the ball to Nate Adkins in the back of the endzone for the 32-31 edge over the Owls. This was also the fifth fourth-quarter comeback this season for the Bucs.

You’re in Good Hands with Adkins
The Buccaneer tight end proves time and time again that he is reliable. Nate Adkins is a junior tight end that excels in the passing game and in the blocking schemes. With a knack for making the big plays and playing until the whistle blows, Adkins is a four-time All-SoCon winner. On Saturday, the Knoxville, Tenn. native produced his best game in a Buccaneer uniform, hauling in seven receptions for 94 yards - both of which are career highs. Over the final two drives in which ETSU scored 15 points in 1:28, Adkins caught five passes for 71 yards and then added the loudest two-point conversion since the return of football with a diving catch in the back of the endzone for the one-point advantage. Adkins will look to do it again this weekend as the 6-3, 240-pound tight end will line up against the stout North Dakota State defense.

Welcome Home Joe
ETSU starting center Joe Schreiber will be walking into familiar, albeit different, territory on Saturday when the Bucs take on North Dakota State. Schreiber, the Eden Prairie, Minn. native, spent two seasons playing for the Bison inside the Fargodome. Schreiber appeared in one game for North Dakota State, primarily suiting up on the scout team. The Minnesota native then transferred to Iowa Western Community College before landing in Johnson City. What is North Dakota State’s loss is ETSU’s gain as Schreiber has played and started in 18 consecutive games for the Blue & Gold.

Running Wild
The Bucs are led in the backfield by the dynamic duo of Quay Holmes and Jacob Saylors. Holmes has accounted for 1,518 rushing yards and 17 touchdowns, while Jacob Saylors has rushed for 985 yards and 10 touchdowns. Saylors, sitting with a career high in yards and touchdowns, has a chance to reach 1,000 yards this weekend to become the first duo in program history to rush for 1,000 yards in the same season. In addition, the two tailbacks can tear things up in the passing game as well. Holmes leads the team in all-purpose yard with 1,817, while Saylor has chipped in for 1,774. The duo has combined for 46 receptions, 442 yards and four touchdowns.

The Unsung Hero
A man that has flown under the radar this season has been ETSU quarterback Tyler Riddell. The Tampa, Fla. native has proven his resilience all season long, despite having his ups and downs. On Saturday, Riddell was flushed out of the pocket numerous times and was able to adapt, finishing the final two drives with a 12-of-16 mark with 114 yards and two touchdowns. In addition, Riddell completed the two-point conversion to send the Bucs through to the next round. Riddell has now thrown three touchdowns in back-to-back games. Tyler “The Mayor” Riddell now has thrown for 19 touchdowns this season, tied for second most in a single season in program history. Meanwhile, he has completed 63.7% of his passes, which would be a new program record should it not drop below 63.1%. Riddell has tossed for 2,372 yards as well, currently fifth most in a single season in Buccaneer history.

Running with the Bison
North Dakota State has been the “Goliath” of FCS football since 2011, winning eight of the last 10 national championships. The Bison have played 158 games since the start of the 2011 season, holding a record of 145-13 - including 89-6 when playing inside the Fargodome. North Dakota State is coming off a 38-7 rout over Southern Illinois, scoring the final 28 points of the game to cruise into the quarterfinals. The Bison rushed for 389 yards and five touchdowns, paced by TaMerik Williams with 112 rushing yards and two scores. Quarterback Cam Miller tossed the ball for 88 yards but rushed for 61 yards and two touchdowns. The Bison average 35.5 points per game and rely heavily on the ground game, ranking second in FCS football in rushing offense (281.6). The Bison are also successful in the third-down battle, ranking 5th in 3rd-down conversion (.479) and 3rd in 3rd-down conversion defense (.256). The North Dakota State defense has posed problems for opponents, ranking 1st in scoring defense (11.7 ppg), 4th in sacks per game (3.58), 4th in red-zone defense (.650) and 6th in rushing defense (83.1). North Dakota State is led by Williams with 606 rushing yard and 10 scores. The ground game has seen 11 different players rush for a touchdown this season, including eight players tallying multiple touchdowns this season.

The broadcast team of Jay Sandos, color analyst Robert Harper, along with studio hosts Mike Gallagher and Don Helman will provide ETSU fans all the information they need to complement their game-day activities.

Saturday’s game will be broadcast on ESPN with the team of Anish Shroff (play-by-play), Mike Golic, Jr. (analyst) and Taylor McGregor (sideline) providing the call this weekend.