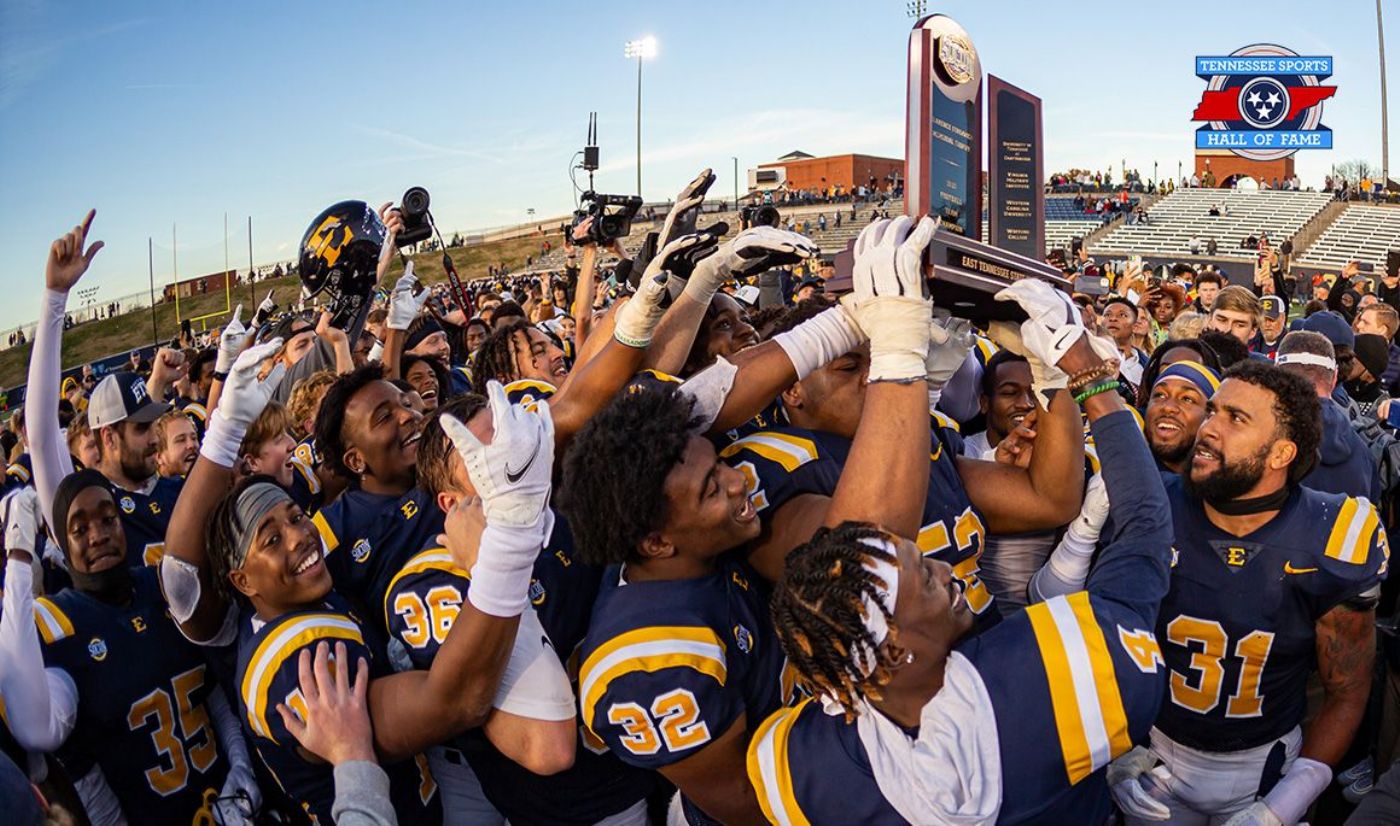 NASHVILLE, Tenn. (May 12, 2022) – The Tennessee Sports Hall of Fame, sponsored by Tennessee Lottery, announced the honorees for its 2022 Achievement Awards on Thursday morning. ETSU Football was named the Male Amateur Team of the Year. The honor will be formally presented as part of the hall’s 2022 Banquet, presented by the Tennessee Titans on July 23 at the Omni Nashville Downtown.

The 2021 season was historic as the Bucs set a program record for wins (11), while claiming their first-ever outright SoCon title and reaching the quarterfinals of the FCS Playoffs for only the second time in school history. Add in the fact that the Bucs also played six games in the spring, finishing 4-2. The Blue & Gold boasted a 2021 overall record of 15-4 in 19 games played. ETSU also set single-season school records for most points scored (425), points per game (32.7), total offense (5,319), rushing touchdowns (32) and total touchdowns (53). The Bucs opened the season with a dominating 23-3 win at Vanderbilt for their second-ever win over Power-5 program, defeated three nationally ranked teams and garnered their highest ranking since the return of football at No. 8 in the AFCA Top 25 Poll. The Blue and Gold earned the No. 7 seed in the FCS Playoffs and recorded their first postseason win in 25 years by knocking off Kennesaw State in the second round, 32-31.

“We all had aspirations and higher goals,” commented Coach Sanders. “But step back and look, we’re 11-2, we’re SoCon champions, we’re 15-4 in 2021. You’ve got to remember this was a team that was picked next to last going into the spring season. I’m proud of what these guys accomplished. I’m proud to be their coach. There’s some great memories and some accomplishments that can never be taken from us.”

Not only will the Bucs be honored at the banquet, but the Tennessee Sports Hall of Fame will also honor former head coach Carl Torbush as well as Tommy Woods and Jerry Robertson. Coach Torbush was named to the 2020 Class, while Woods and Robertson were tabbed to the 2021 Class. Robertson was also awarded the Lifetime Achievement Award. This will be the first in-person banquet since 2019 due to the global pandemic, so the Tennessee Sports Hall of Fame will allow winners from 2020 and 2021 to attend this year’s banquet as well.