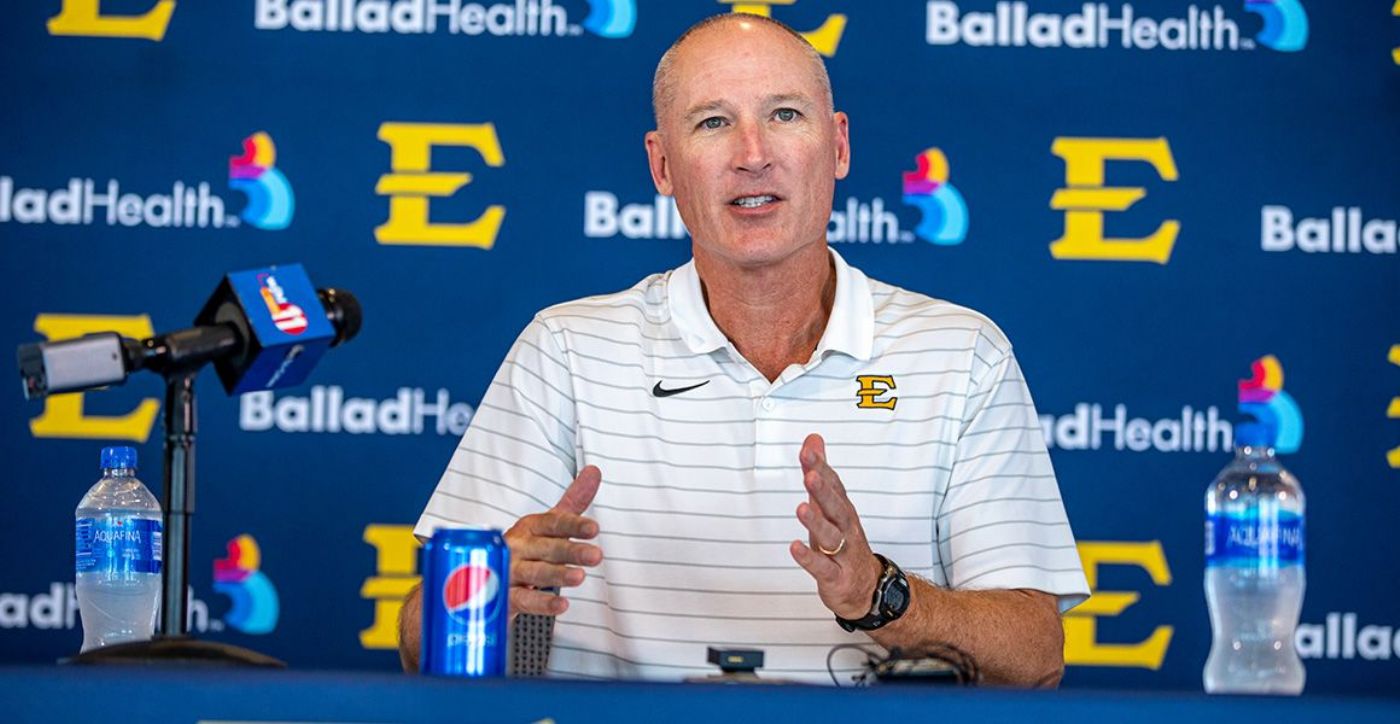 JOHNSON CITY, Tenn.  (Sept. 5, 2022) – Members of the ETSU football program spoke to the media Monday ahead of the team’s first road game at The Citadel, set for Saturday, Sept. 10 at 4 p.m. in Charleston, S.C.

Below are comments from Coach Quarles, Saylors and Huzzie.

Are you hoping to see a big leap in the second game now that the opener is behind you?

“We’re hoping to see some gains from Week 1 to Week 2. We did a lot of good things last Thursday night. I think offensively, the defense set us up a few times – whether it was special teams or defense – so we played with a short field a few times. I think we need to run the ball better – we have to this week for sure (with Citadel). Defensively, it’s hard to find a whole lot that we didn’t do well last Thursday. I think getting that first game behind us is big. I think you’ll see some guys a little more relaxed and more confident playing for the second time than they did the first time. For a lot of them, that was their first time playing meaningful snaps.

Talk about going on the road for the first time and playing The Citadel?

“It’s always tough playing The Citadel. They will have a great crowd there…they are one of those tough teams where it doesn’t matter when you play them – they are always tough. They are physical, the three-back offense presents some problems and they are going to be content to three and four-yard you to death. They’ll go for it on fourth down at their end of the field – it doesn’t matter to them. The number of offensive snaps we’re going to get – it’s going to go down. You’re not going to get as many snaps as you normally would, so we need quality snaps and make sure we take advantage of our snaps. Obviously, it’s also important with them to be in the lead. You don’t want to play from behind against a team like The Citadel.

Does it help having a few extra days to game plan after playing last Thursday?

“Sure, I think so – especially for our defense to prepare for the three-back offense. It’s a little bit different because you have to take care of the dive, the quarterback and the pitch each time…I think a few extra reps, especially for our defense, can only help us. But after this, you get in that routine of playing on Saturday and going from there – on auto-pilot, if you will.”

How did the new blocking rules impact the first game and how will it affect this week?

“There weren’t many times where I saw (The Citadel) trying to cut out on the perimeter, so I think it has a pretty big effect on that style of offense. I watched a little bit of Navy Saturday – they run the same thing – and a little bit of Army. It’s just different when you can’t throw at people’s legs on the perimeter – I think it changes that style of offense. Now, it still comes down to how well you block inside, but perimeter runs are a little different now since you can’t cut.

Talk about your first experience as head coach inside William B. Greene, Jr. Stadium.

“It exceeded expectations. I knew it would be a fun place in, but for a Thursday night, the crowd was awesome, the energy was incredible and our student section was great. Other than the cannon going off during the extra point, it couldn’t have been much better. But that will give us something to laugh about and talk about for a long time. (Greene Stadium) is just such a great place to play college football games and watch fireworks after the game. I think it’s a huge advantage to play at Greene Stadium.”

What’s it like as a defense game-planning for The Citadel’s unique offense?

“It’ll be more slow towards the back end, but we always have to stay focused and locked in. You never know when they will try to hit you on a big play. Sometimes they’ll rock you to sleep like a little baby and when you aren’t expecting it they will raise up and throw the ball and just hit for big numbers…sometimes you can see it coming based on their alignment.

Does the new blocking rules affect the defense or perhaps make your job easier?

“I wouldn’t say easier, but it makes you a little less worried about getting chopped down downfield. Not being able to chop somebody makes it kind of tough (on them). You got to stay up and I think that changes the whole offense – no more just diving down. And for us, we just have to stay high and shoot hands.

After last night’s LSU game, was that a strong example of how special teams can affect a game?

“Absolutely. Special teams can help you, but it can hurt you too.”

What does the offense need to do to get those yards per carry up a bit from Thursday night?

“I think just focusing on the details. Obviously, it’s a new offense for us, so just those small details, after looking back on film from last week, were really the deciding factor between popping a run or just sticking it in for a one or two-yard gain. That includes me, as well. There were a couple of runs plays where I tried to run it like the old system, but if I had run it properly, it would’ve had a more likely chance of popping out. I think another week of preparation will do this offense well.”

How important is it to take advantage of each possession against a team like The Citadel?

“It’s no secret they’re going to try to keep the ball as long as possible. In the past when we’ve played them, the time of possession have dropped five or six (minutes) compared to other games. With this new offense, I think more so we’re just going to do what we do to the best of our ability. We know what they are going to do, but at the end of the day if we focus on us and do the things that we need to do, there’s not much that can stop us or compare to us.”

What is your message to the players who will play in their first SoCon game Saturday?

“In this conference, any team can win in any given week. It doesn’t matter if they are ranked last or top dog – you can lose. It’s just as easy to win as it is to lose. The message I preach our other guys on away games is just attack it like it’s another game…when we get to the game, don’t try to do anything too fancy, don’t try to go out there making all the plays. Just do our jobs.