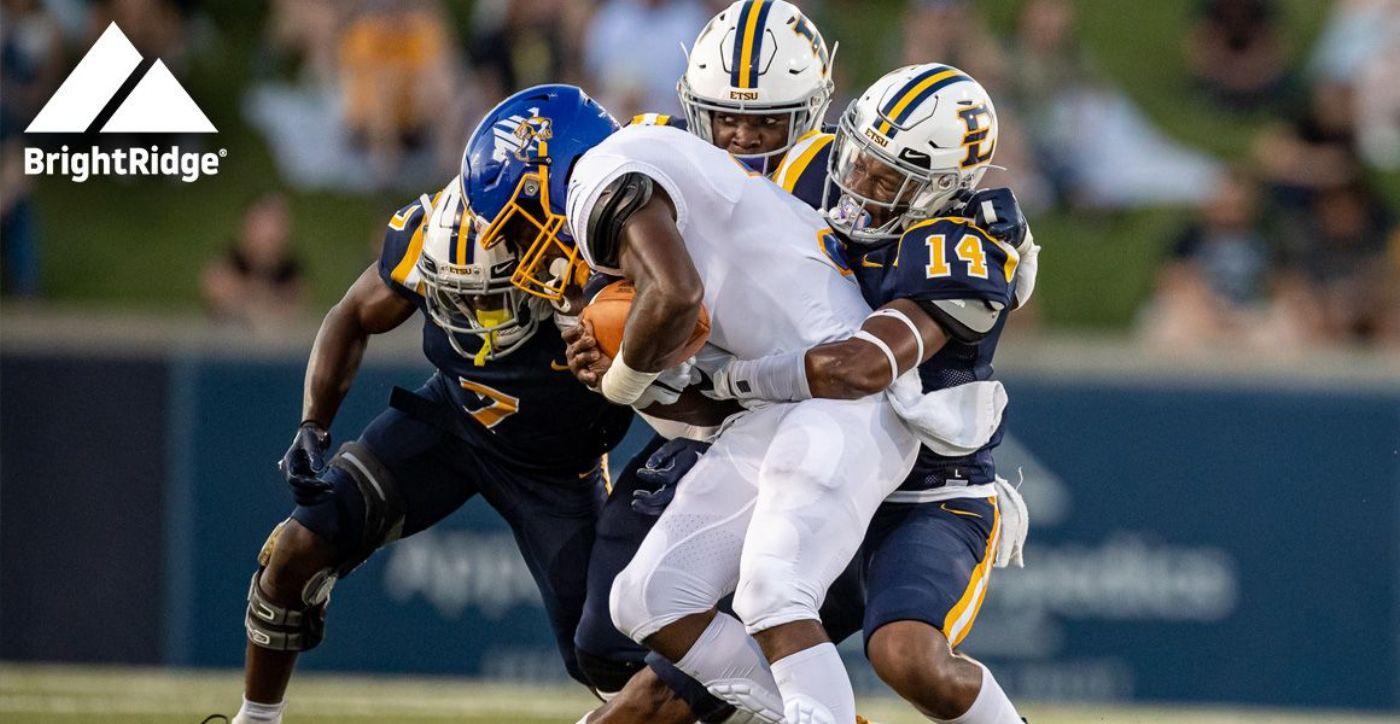 Bucs look to bounce back against Paladins

JOHNSON CITY, Tenn. (Sept. 16, 2022) – Suffering an unanticipated loss to The Citadel last week, the No. 19/18 ETSU football team returns to Johnson City to host Furman in its Southern Conference home opener on Saturday night inside Greene Stadium. Kickoff is set for 7:30 p.m.

Gold Out: The Bucs will wear their all gold uniforms on Saturday night, while fans will receive a gold rally towel, sponsored by the ETSU College of Public health … ETSU fans are encouraged to wear gold apparel on Saturday!

Youth Day: Saturday’s game against Furman is youth day, where children 12 and under receive free admission with a paying adult. Tickets for this promotion can be claimed at the ticket windows on game day. For tickets and more information, call 423-439-3878.

Fireworks: In addition to youth day, ETSU will complete Saturday’s festivities with a post-game fireworks show presented by Pepsi.

Buc Walk: The much-anticipated Buc Walk will begin two hours prior to each home game. For Saturday’s game, the Buc Walk will commence at 5:30 p.m.

Food City Zone: The Food City Zone will open three hours prior to kickoff for all home games, with inflatables for children and other fun-filled pregame activities. The Food City Fan Zone is located between Lots 21 and 22 near the main roundabout entering campus from State of Franklin Road.

Click here for a full listing of Things to Know for Saturday’s opener.

Saturday marks the 32nd SoCon home opener for the Bucs … Overall, ETSU is 20-11 in the previous 31 SoCon openers, including winning four of the last six since rejoining the league in 2016 … The Bucs have played Furman three times in SoCon home openers, going 1-2 in those matchups … ETSU has won its last two SoCon home openers – wins over Wofford last fall and against Samford in the spring of 2021 … The Blue and Gold won six straight SoCon home openers from 1992-97 and five straight from 1986-90, including a 38-17 mashing of Marshall in 1990.

BUCS ON THIS DATE

ETSU redshirt freshman linebacker Chandler Martin was a tackling machine in last week’s game at The Citadel … Martin set a new single-game program record with 23 hits (three solo, 20 assisted), including one tackle for loss … Martin, who broke Nakia Thomas’ mark of 22 (set against Appalachian State in1993), was named Southern Conference Defensive Player of the Week on Monday and then SoCon Student-Athlete of the Week on Wednesday … The marketing & analytics major has a 3.32 GPA and was named to the SoCon Honor Roll last season … Martin’s 23 tackles are the most by a SoCon player since Western Carolina’s Rock Williams totaled 24 at The Citadel back on Oct. 13, 2012 … The 23 tackles are also tied for the most by any FCS and FBS player this season.

Tyler Keltner reached a milestone in last Saturday’s game at The Citadel as he registered his 100th career made PAT … Keltner, who is a perfect 100-for-100 in extra-point attempts this season, ranks second all-time in ETSU history in extra-points, trailing only Jerry Chapman who went 126-for-140 from 1995-97 … Keltner also ranks fifth all-time in scoring with 223 points and needs 15 points to pass Chapman for fourth all-time … JJ Jerman holds the record for kickers at 253 points … Keltner ranks 12th among current FCS kickers with 100 made extra-points, 11th in points and fourth in made field goals (41) … Last season, Keltner was a perfect 51-for-51 in PATs (setting a new single-season program record) ... Keltner accounted for 102 points last season, the most by a kicker in program history.

Jacob Saylors enters Saturday’s game needing 136 rushing yards to pass Brian Edwards for third all-time … Saylors has rushed for 2,794 yards over his career, while Edwards is at 2,930 … Will Huzzie needs 216 receiving yards to move into the top-five all-time as he has totaled 1,556 receiving yards on 116 catches … Jeff Johnson is fifth all-time with 1,772 yards on 142 catches … Huzzie, who passed Greg Johnson and Ron Hillman last week for sixth all-time in receptions with 116, needs 10 to move into the top-five with Chris Beatty having 125, set from 1991-94.

THE COMFORT OF GREENE

The Bucs boast a .759 winning percentage when playing games in the friendly confines of William B. Greene, Jr. Stadium ... Entering its sixth season of existence, Greene Stadium has held 22 wins for the Blue & Gold, while yielding just seven losses ... The Bucs finished with a perfect 7-0 record at home last season, becoming one of 16 FCS programs to go undefeated at home last year ... ETSU finished 4-2 inside Greene Stadium in its first season in 2017, following that season up with a 5-1 home mark in 2018. ETSU finished 3-3 at home in 2019 with wins over Shorter, Austin Peay and Mercer ... The Bucs competed in three games inside Greene Stadium during the 2021 spring season ... During that three-game span, ETSU finished with a 2-1 record ... In the 29 games played inside its home, ETSU is outscoring the opposition, 871-593, holding its foes to 20.4 points per contest.

UNDER THE LIGHTS IN GREENE

Furman leads the all-time series, 27-9, while ETSU has just won three of the last 10 meetings with the Paladins … Saturday marks the 18th all-time meeting played in Johnson City with the Bucs winning six of those contests, the most recent being the historic 29-27 victory back on Sept. 22, 2018 when Austin Herink entered midway through the third quarter with ETSU down 27-6 and orchestrated the program’s largest comeback win thanks to a game-winning safety by Dylan Weigel with 2:10 remaining in the contest … In the quarter and a half of play, Herink was 9-of-14 for 202 yards and a touchdown, while he also added 10 yards rushing … ETSU’s first ever home win against Furman came in the first meeting played in Johnson City – a 24-13 victory back on Oct. 19, 1974 … The last four meetings have been decided by a combined 17 points as the teams split the last four meetings … To go with its 29-27 win in 2018, ETSU won for just the third time ever in Greenville, S.C. last season thanks to a 17-13 victory on a Malik Murray touchdown in the closing seconds … Furman took the two games in between – a 17-10 win on Sept. 18 at home and a 17-13 win in the spring of 2021 in Greene Stadium.

The broadcast team of “Voice of the Bucs” Jay Sandos, color analyst Matt Wihljelm and stat-man Don Helman will provide ETSU fans all the information they need to complement their game-day activities.

At halftime, the crew will have the Mr. Electric Halftime Show, while fans can tune into the Mullican Flooring Post Game Show for a full wrap up, with game statistics, players and coach interviews and other post-game information.

Saturday’s game will also be broadcast on the ESPN+ with the team of Robert Harper (play-by-play) and Mark Hutsell (analyst).

Fans can purchase tickets for Saturday’s game online. For more information, click here. Tickets can also be purchased by calling the ETSU Ticket Office at 423-439-3878. Students can pick up their tickets at the gate on gameday.