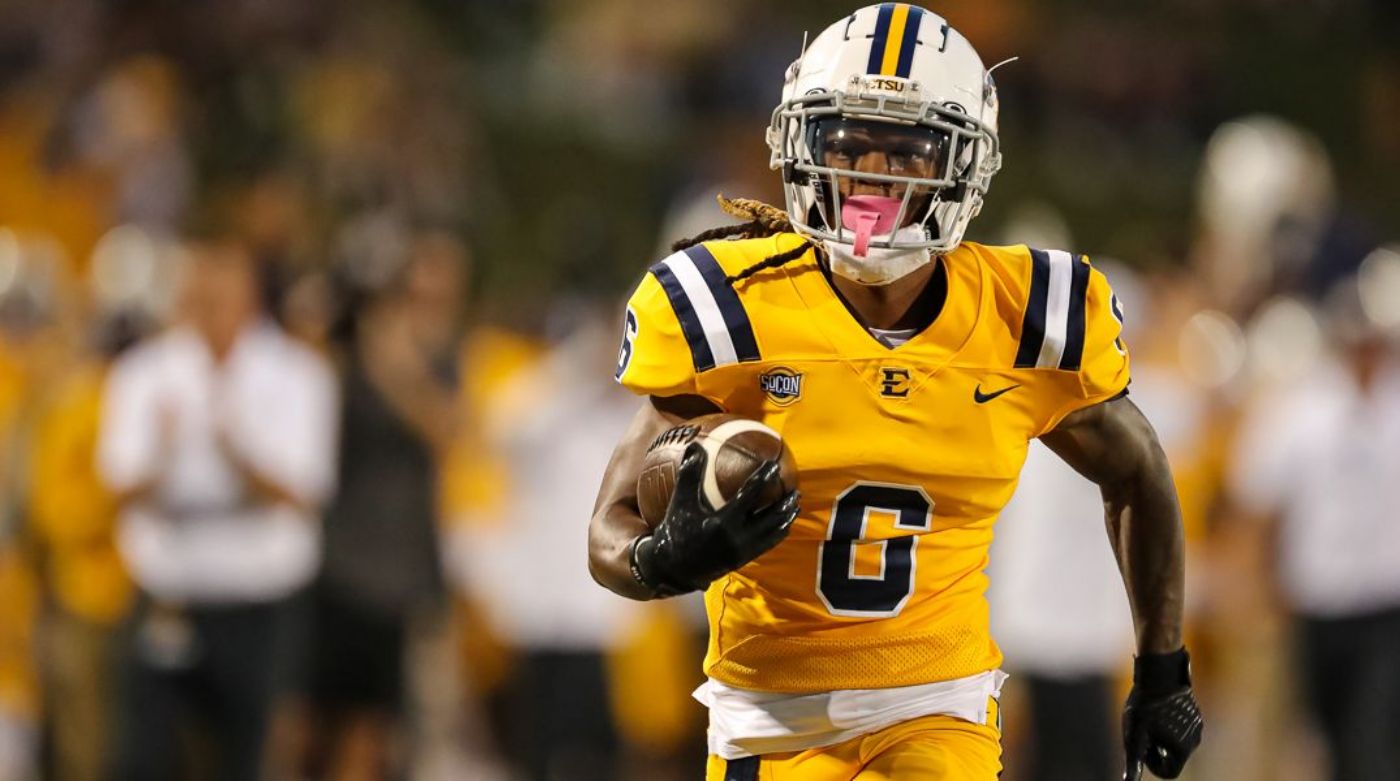 No. 18 ETSU slips in SoCon home opener against Paladins

JOHNSON CITY, Tenn. (Sept. 17, 2022) – ETSU hosted Furman for its Southern Conference home opener on Saturday, falling in the final minute of a 27-14 loss at William B. Greene, Jr. Stadium.

Furman took advantage over four ETSU turnovers and turned them into 13 points, including a late touchdown with under a minute remaining to secure the win.

The No. 18 Bucs fall to 1-2 overall and 0-2 in the conference, while the Paladins – who are receiving votes in both FCS polls – improved to 2-1 with tonight serving as their first conference game.

Furman 3, ETSU 0: The Paladins took advantage of a turnover on the second play from scrimmage – an interception by Hugh Ryan – and turned it into a 44-yard field goal by Ian Williams after three incomplete passes.

ETSU 7, Furman 3: Redshirt sophomore quarterback Tyler Riddell (Tampa, Fla.) had a short memory after the interception, throwing a deep strike to junior Einaj Carter (Poughkeepsie, N.Y.) for a 75-yard touchdown on his very next play from scrimmage. The extra point put the Bucs ahead 7-3 within the first two minutes of the game.

ETSU 7, Furman 6: The game had early makings of a high-scoring affair, but all scoring ceased until Williams punched through a 43-yard field goal to cap off a five-play, 20-yard drive.

Furman 13, ETSU 7: The Buccaneer defense kept Furman out of the end zone up until the final drive before halftime, as Tyler Huff found Wayne Anderson, Jr. over the middle for a 15-yard touchdown strike with 22 seconds remaining to cap off a five-play, 53-yard drive.

Furman 20, ETSU 7: Furman extended the lead to two possessions with a 14-play, 89-yard drive capped off by a short pass from Huff to Ryan Miller near the goal line with 6:13 to go in the quarter. The drive took nearly six minutes off the clock.

Furman 20, ETSU 14: Riddell and Carter connected for a second time with 3:14 to go in the third frame, as Carter made a running catch near the left pylon and remained inbounds for six. Tyler Keltner (Tallahassee, Fla.) booted through the extra point to make it a six-point game. The Bucs went nine plays for 75 yards.

Furman 27, ETSU 14: The Bucs remained in striking distance the whole fourth quarter, but an interception on 4th and 19 with under a minute to play allowed Furman to take over at the ETSU 46. On the ensuing play, Furman’s Dominic Roberto rushed 46 yards for the final score.

For the ninth straight game, ETSU had a capacity crowd as Saturday’s attendance was 9,836, marking the fourth-largest crowd in Greene Stadium history

The Buccaneer defense held Furman to 3 of 13 on third down chances and made one fourth down stop, while ETSU finished 5 of 16 on third and went 0 of 1 on fourth down

The Buccaneer offense turned the ball over four times, resulting in 13 points for the Paladins … ETSU’s defense forced one turnover but the Blue and Gold were unable to capitalize on the Furman miscue

Riddell utilized seven different targets in the passing game, including a pair of touchdown passes to Carter who finished with three catches for 87 yards … ETSU’s first score came on a 75-yard hook-up between the two, marking Carter’s longest reception of his collegiate career and the longest of the season by a Buccaneer player

Saylors led the rushing attack with 19 carries for 54 yards … Riddell added seven rushes for 24 yards, including a 21-yard scramble to extend a drive

The Bucs are northbound next Saturday to face Robert Morris in non-conference action. Kickoff is set for Saturday, Sept. 24 at noon in Pittsburgh, Pa.