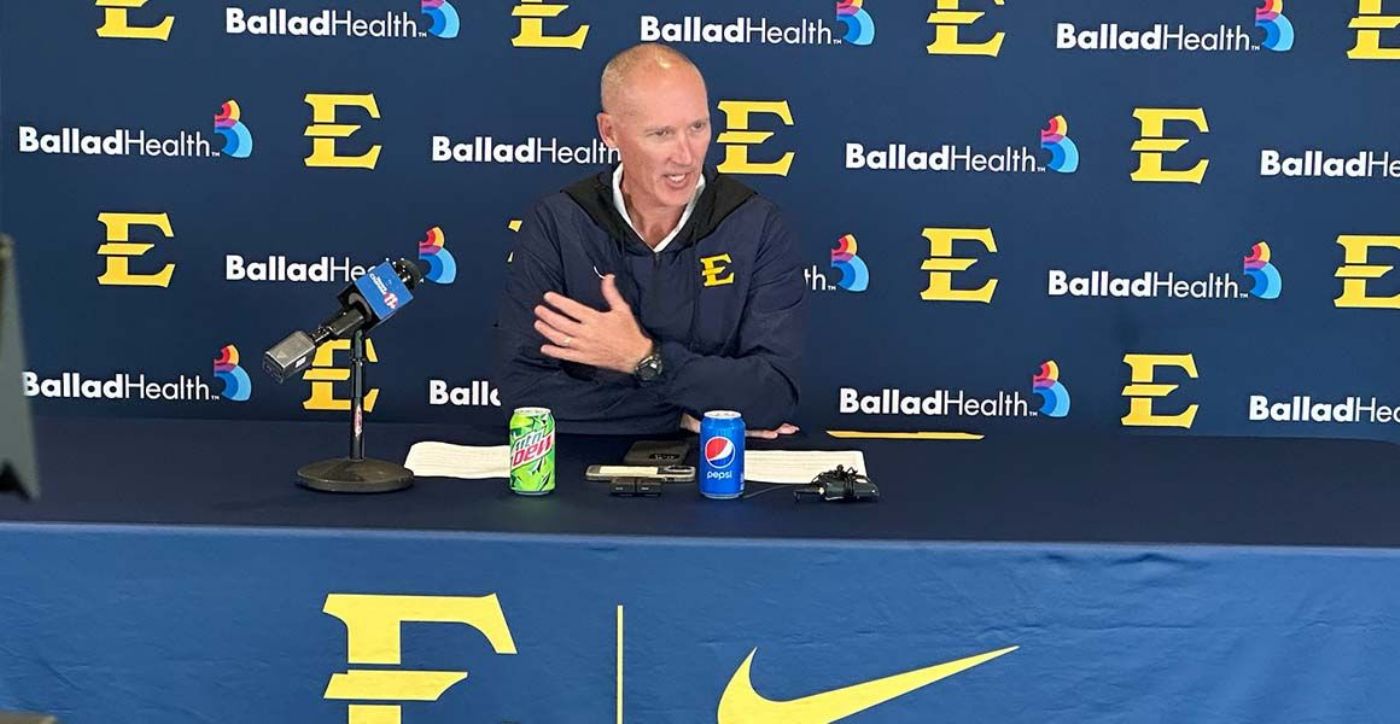 Bucs travel to Lexington, Va. this Saturday for 1:30 p.m. kickoff

JOHNSON CITY, Tenn. (Oct. 3, 2022) – ETSU football hosted its weekly football press conference for local media at William B. Greene, Jr. Stadium on Monday, recapping last week’s game against No. 10 Chattanooga and looking ahead to this Saturday’s matchup with VMI in Lexington, Va.

Below are comments from Coach Quarles, Matthews and Porter.

Now that you’ve had a chance to watch the film, what did you see offensively?

We just didn’y make many plays. Obviously, we got off to a fast start in the first half, and it was just that – a start. I think the theme of the day was “finish” and we just didn’t finish very well…it just felt like we were backed up the whole first part of the second half. Obviously, it’s not an excuse. It just is what it is and we never seemed to get anything going. But we didn’t do much different than we did in the first part of the game. They gave us a bit more pressure than they had shown. If we execute and just make a play, I think we’re in good shape…I think having to settle for field goals came back and got us…we just we need to do a better job finishing — coaching, players making plays. They made some plays…give them credit.

Is “finishing” the theme surrounding this week’s practice?

Yes. That’s what we talked about yesterday and a little bit this morning was just “finish.” Our players are going to hear that today from me. Just finish in everything you do — it’s practice, it’s school, it’s weight room, it’s everything. Nobody wants to hear it, but we’re close. But, it’s a bottom-line sport. You’re judged on whether you win or lose and clearly we lost that one. We’re in a spot that nobody thought we would be in — but we are and we own it. I own it. The only thing we can do is keep working, keep getting better and keep doing the things we’re doing — just better…I believe we’ve got guys that are made of the right stuff, that will show up, will work hard and continue to play hard.

The VMI-ETSU game always seems to be close…are you expecting that Saturday?

Going up there, I’ve always thought that was a tough place to go. You’re always playing in front of the Keydets. It’s always tough to get a win there. It’s always an afternoon game since they don’t have lights and it looks like the weather will be good, which will be nice. They are tough and they’re physical. They’ve got two new coordinators on both sides of the ball. They are a little different defensively, but offensively very similar to what they’ve been doing (in past seasons). It’ll be like every place in this league — a tough place to play — but we need to go get a win.

Talk about the defense and how you think they match up with VMI?

I think our defense has played great this year. They’ve kept us in games when maybe the offense was struggling. Coach (Billy) Taylor (Defensive Coordinator) does a phenomenal job and he’ll dial up pressures coming from everywhere and the back half has played well. I think that’s an area we need to continue to (succeed in). I thought we had guys that played exceptionally well — Jalen Porter had a big game Saturday and Chandler Martin continues to get better and better. That’ll be a key. VMI has struggled and played two quarterbacks at times…you don’t know which quarterback you’re going to get, but we have to get after them and don’t focus on who we’re playing. We just have to focus on us.

How reassuring is it having players that seem on board despite the team’s record?

I appreciate it. I told them after the game that I hurt for them more than I can tell them. I do appreciate them fighting, playing hard and doing all the things we ask them to do. I believe (the players) are trusting us and I want them to see some results. This is similar to a lot of the games they played last year — they were just able to flip them for whatever reason. We’ve got to figure out that reason and learn how to flip those games because each game has been a one possession game. I know the Furman game they scored late to make it two, but it’s come down to the wire in each of them. A play here or two and it’s a different result.

What was the difference in the first and second halves against Chattanooga?

They brought a lot more pressure in the second half than they did in the first half. We tried adjusting, but they always made sure they had an extra man that we couldn’t block so it was good on them to make that adjustment. That’s definitely something that we’ve seen in the past. We just have to continue working on making sure we’re good on our assignment.

Do you feel it’s just a matter of getting one win to turn things back around?

Absolutely. There’s been so many games where we’ve been just one or two plays away from taking away the dub. We just need to finish out the games. Too many times, we haven’t finished drive, finished plays. We’ve just got to put it all together.

Overall, how tough is it to be 0-3 in conference play after winning it last year?

It’s a pretty big bummer, but miracles happen all the time and things can easily turn around for us. We just have to keep putting our head down, keep grinding and just keep playing the game.

How fun is it play on this defense?

Talk about having Coach Taylor on the defensive side.

I believe Coach Taylor is a big piece to the puzzle. Just keeping him here is what brought me back. Coach Taylor just being the defensive coordinator he is, I know he’s going to draw up the best plays for us. And I know that I’m going to execute just as well as the other 10 guys. So yes, I enjoy being on this defense and playing for Coach Taylor.

Do you feel the defense can do some damage against VMI based on the amount of sacks they’ve given up?

We pay very close attention to things like that throughout the week. Just seeing how the line works, how they pass it and are they aggressive enough — can we attack them coming out? I feel like this week, one of the things we want to do is attack the line. They’ve given up 18 sacks and I believe we are going to bring more sacks to the defense this week.