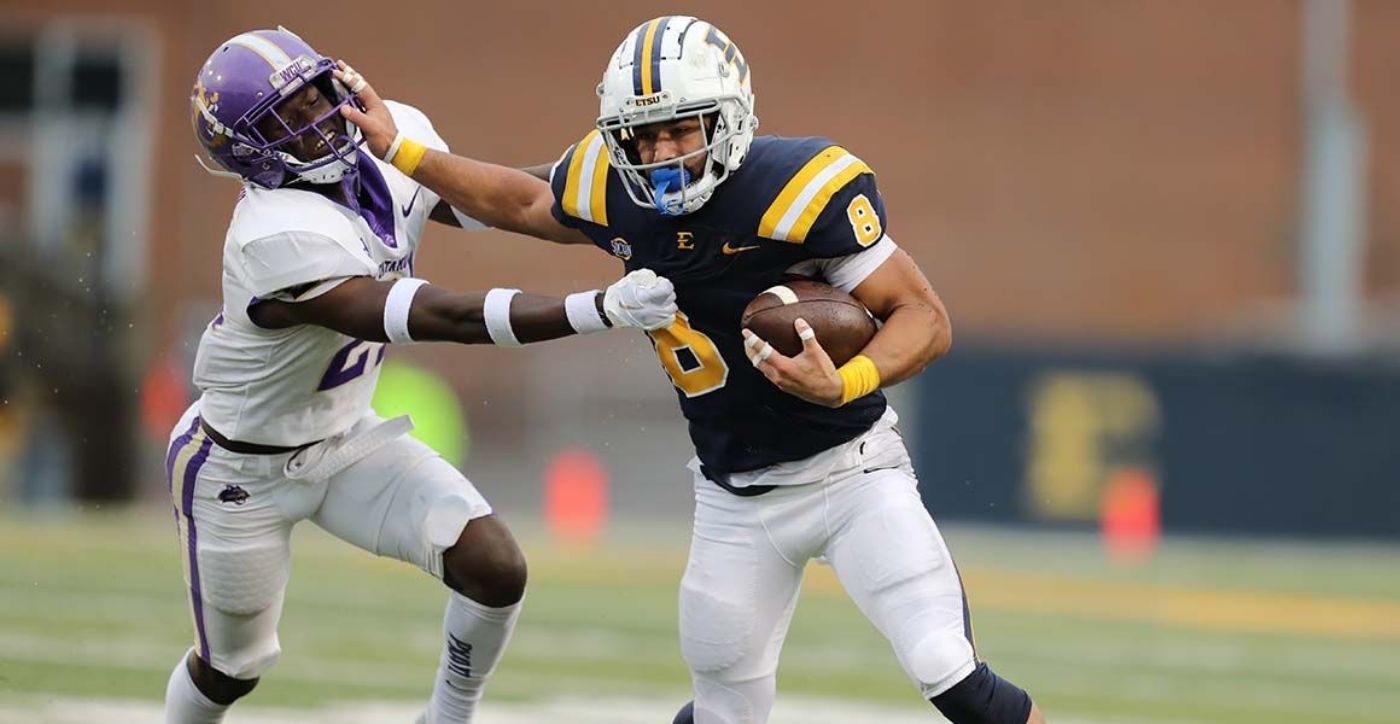 Controversial no-call leaves Bucs wondering what might have been

JOHNSON CITY, Tenn. (Nov. 12, 2022) – In sports, one play doesn’t typically make or break a game, but a controversial no-call late in the fourth quarter possibly could’ve decided the outcome of the 2022 Blue Ridge Border Battle on a gloomy and wet Saturday afternoon inside William B. Greene, Jr. Stadium.

With ETSU limiting one of the top scoring defenses in the Southern Conference out of the end zone most of the afternoon, the Buccaneers looked to have mounted the game-winning drive, but with the Blue and Gold deep in the red zone, a no-call left the home team settling for a field goal.

On 3rd-and-goal from the six yard line, ETSU quarterback Tyler Riddell (Tampa, Fla.) was sacked for a loss of eight-yards where his facemask was clearly grabbed and helmet was twisted but no flag was called. Following the questionable no-call, Tyler Keltner (Tallahassee, Fla.) kicked a 31-yard field, tying the game at 17 with 2:25 remaining.

Instead of receiving what should have been a first down and moving the ball half-the-distance to the goal line, ETSU had to settle for the field goal, giving the Catamounts one final drive. Western Carolina drove 59 yards on nine plays and Richard McCollum kicked a walk-off 33-yard field goal as time expired, lifting the visitors from Cullowhee, N.C. to a 20-17 victory.

With the loss, ETSU – who honored 13 seniors playing their final game inside Greene Stadium on Saturday – moved to 3-7 overall and 1-7 in conference play. Western Carolina won its second straight game, improving to 5-5 overall and 3-4 in SoCon action.

Western Carolina 7, ETSU 0: The Catamounts took the opening dive of the game 81 yards on eight plays, resulting in a five-yard touchdown reception from Cole Gonzales to Censere Lee. Gonzales went 6-for-6 for 57 yards and had one rush for 38 yards. With 11:05 remaining in the first quarter, Western Carolina took the early, 7-0.

ETSU 7, Western Carolina 7: After going 3-and-out and dodging disaster on its opening drive – where punter Trace Kelley (Gallatin, Tenn.) had trouble with a wet ball on the snap – he eventually threw the ball away for an incomplete pass. The Catamounts started the drive on ETSU’s 27-yard line, but the Bucs’ defense rose to the challenge to force a turnover on downs. From there, the Blue and Gold went 72 yards on nine plays and scored on a 20-yard burst up the middle by Jacob Saylors (Jasper, Tenn.) to tie the game at 7-7 with 4:07 left in the quarter. Saylors accounted for 42 yards on the ground during the scoring drive.

ETSU 14, Western Carolina 7: After the Buccaneer defense forced a fumble and a recovery on a 4th-and-3 from the ETSU 36-yard line, the Blue and Gold started the drive on their 47 thanks to Quinn Smith (Cincinnati, Ohio) coming up with the loose ball thanks to Di’Andre Davis (Charlotte, N.C.) poking it loose. ETSU went 53 yards on seven plays in exactly three minutes with Jawan Martin (Decatur, Tenn.) running it in from three yards out, giving the Bucs their first lead of the game with 10:01 left in the half.

ETSU 14, Western Carolina 10: The Catamounts got back on the board in the closing minutes of the first half when Richard McCollum connected on a 40-yard try, marking his 15th make of the season with 1:33 remaining in the opening half.

Western Carolina 17, ETSU 14: Following a scoreless third quarter, the Catamounts quickly found pay dirt in the fourth as Gonzales found Raphael Williams for a 29-yard touchdown and the Catamounts regained the lead 32 seconds into the fourth.

ETSU 17, Western Carolina 17: The Bucs put together a long scoring drive that resulted in a game-tying 31-yard field goal by Tyler Keltner, making it 17-17 with 2:25 remaining in regulation. On 3rd-and-goal from the six-yard line, Riddell was sacked for a loss of eight yards where his facemask was clearly grabbed and helmet was twisted but no flag was called. Following the questionable no-call, ETSU had to settle for a field goal.

Western Carolina 20, ETSU 17: For the second time this season, ETSU suffered a loss on a walk-off field as McCollum made the 33-yard field goal as time expired, lifting the Catamounts to the road win. The key play on the drive was a 31-yard completion to Censere Lee where Gonzales just threw the ball up into no-man’s-land and Lee came out of nowhere to make a remarkable catch on 3rd-and-11.

The Bucs conclude the 2022 season next Saturday when ETSU travels to Starkville, Miss. to take on Mississippi State. Kickoff is set for Noon ET at Davis Wade Stadium.