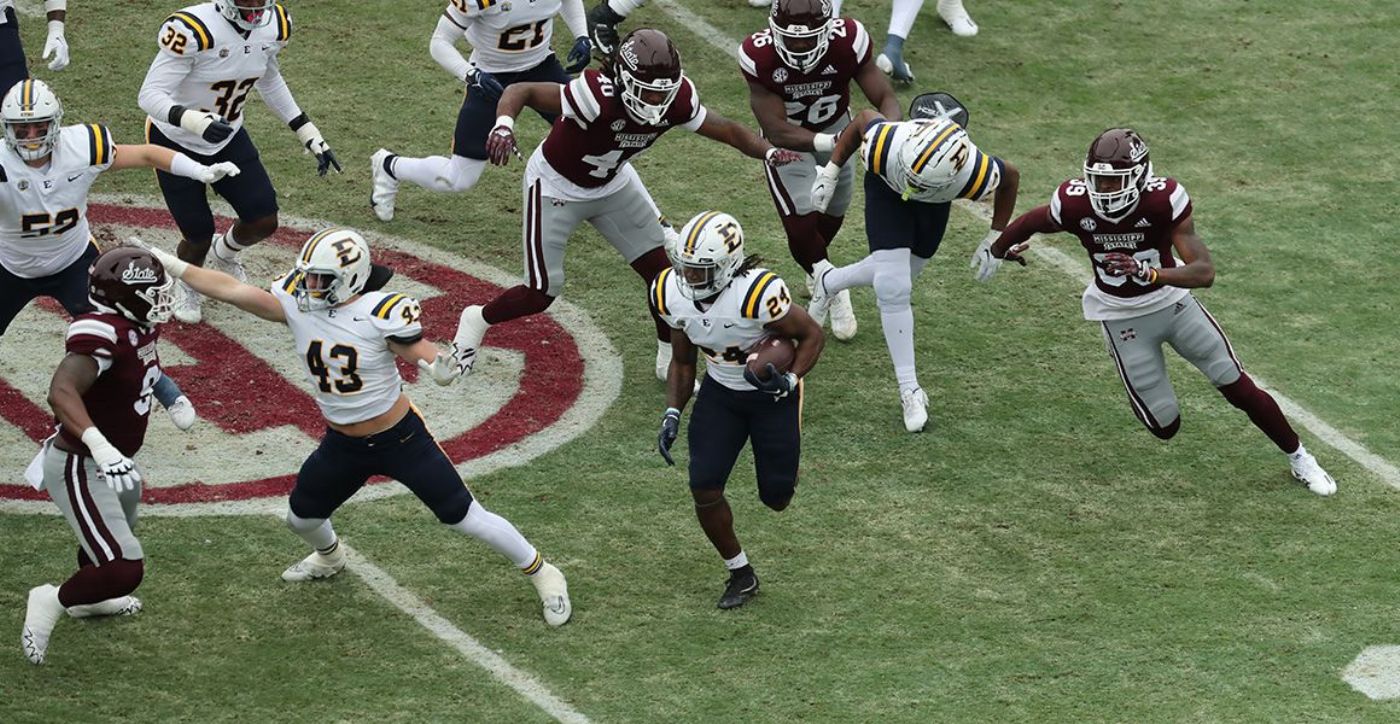 ETSU, a year removed from winning a program record 11 games, winning the Southern Conference title and advancing to the quarterfinals of the FCS Playoffs, lost its final five games of the season to finish with an overall record of 3-8. Mississippi State improved to 7-4 and takes on Ole Miss Thanksgiving night in the Egg Bowl.

For the game, the Bucs finished with 154 yards of total offense, while Mississippi State totaled 418 yards. ETSU rushed for 111 yards, while the Bulldogs threw for 342. The Buccaneer quarterbacks threw three interceptions on Saturday, while defensive back Alijah Huzzie (Franklin, Ga.) registered his sixth of the season. Huzzie picked off Sawyer Robertson in the fourth quarter for his 12th career interception.

ETSU’s lone scoring play came on a fourth-quarter blocked punt by Buffalo transfer Ja’Varius Harrison (Quincy, Fla.) and Erek Campbell (Memphis) – who blocked a punt earlier this year at Robert Morris – scooped it up and scored on a 29-yard return. This marked the Bucs’ second scoring play on a blocked punt this season as they also returned it at Robert Morris, while Jawan Martin (Decatur, Tenn.) blocked a punt at Mercer back in October.

The Bulldogs scored on their first three possessions to open a 21-0 lead – and after ETSU got a fourth-down stop to start its fourth series on the Mississippi State 24-yard line – Baron May’s (New Philadelphia, Ohio) pass was intercepted and returned 82 yards for a touchdown. May’s pass was intended for Cameron Lewis (Atlanta), which was bobbled and kicked up in the air, allowing Emmanuel Forbes to return it for his sixth career pick-six, breaking an SEC and FBS record.

After leading 35-0 at halftime, the Bulldogs scored 21 points in the second half to post their seventh win of the season. Mississippi State scored 21 points off the three Buccaneer turnovers on Saturday, while the Bulldogs’ average starting field position was its own 40-yard line.

Mississippi State quarterback Will Rogers finished 30-for-37 for 301 yards and five touchdowns.

To go with his blocked punt, Harrison led the Bucs with nine tackles, while Stephen Scott (Greensboro, N.C.) – who missed the last five games – finished with eight hits. Davion Hood (Kennesaw, Ga.) had one of ETSU’s two sacks.

ETSU, who was looking to knock off an SEC foe for the second straight year after winning at Vanderbilt in last season’s opener, is 2-14 all-time against Power-5 teams.