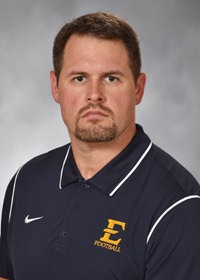 Losey, who has spent the 2013 season as an assistant coach at Alcorn State, played at ETSU in 2002 and 2003. He said it’s an honor to be back in Johnson City and helping to resurrect a program that he watched end back in 2003.

Prior the 2013 season at Alcorn State, Losey coached running backs for Campbell University in Buies Creek, N.C. In his only season Campbell, Losey tutored freshman fullback Dalton Dillon to All-PFL honors. Losey spent the 2011 season at Webber International University where he coached the offensive line and was responsible for writing up the "Warrior" run game. He had two offensive linemen who were nominated for All-America honors under his direction.

During the 2009 and 2010 seasons, Losey served as the Offensive Line quality control coach at Florida State University.  As a member of the Seminoles staff, Losey assisted with the offensive line under Offensive Line Coach Rick Trickett and served under Head Coaches Jimbo Fisher and Bobby Bowden. During Losey’s two seasons at Florida State, the Seminoles had two bowl victories in both the 2009 Gator Bowl and the 2010 Chick-Fil-A Bowl.

The Hixson, Tenn., native began his coaching career as the Offensive Graduate Assistant for Western Kentucky University during the Hilltoppers transition from Division I FCS to Division I FBS, joining the Sun Belt Conference.  Losey worked under Offensive Line Coach Walter Wells and Head Coach David Elson during the 2007 and 2008 seasons.

Losey enjoyed a deocrated playing career at both ETSU and Western Kentucky, starting all 47 games of his college career. He began his collegiate career at ETSU in 2002, where he was a Southern Conference Freshman of the Year nominee.  After the 2003 season, ETSU discontinued its football program and Losey transferred to WKU, where he was selected to the All-Gateway Conference 2nd team and a First Team All-Newcomer selection in 2004. As a senior, Losey was voted to the American Football Coaches Association All-America First Team and Associated Press All-America Third Team under the direction of Offensive Line Coach Walter Wells.

In addition to gaining All-America status in 2005, Losey was named to the All-Gateway Conference First Team while receiving National Lineman of the Week for his play against SEC member Auburn University and also earned Conference Player of the Week twice during the season.

Losey graduated from Western Kentucky with a double major, earning his B.A. degree in History and Social Studies in 2006.