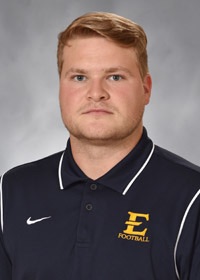 Andrew Sims is entering his fourth year on ETSU’s staff and his second as the Director of Football Operations.

Prior to ETSU, Sims spent three seasons (2010-13) at Indiana where he assisted in the development of the Hoosiers’ recruiting office. At IU, Sims worked one season under Bill Lynch and two seasons under Kevin Wilson. Sims played a role in bringing in the highest ranked recruiting class in program history in 2013, as it featured four 4-star signees, according to Rivals.com. In addition, Sims aided in the recruitment of current NFL players Cody Latimer (2nd round), Jordan Spriggs (2nd round), Tevin Coleman (3rd round pick), Nate Sudfeld (6th round), Stephen Houston, Darius Latham, Jake Reed, Bobby Richardson and Shane Wynn.

Sims earned his B.S. in Kinesiology from Indiana University in 2012, while he received his Master of Business Administration (MBA) from ETSU in 2015.