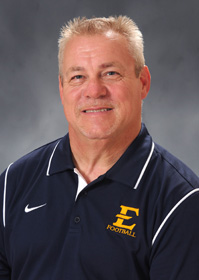 Currently in his seventh year, Allan Johnson continues to head the Football Strength & Conditioning Program at East Tennessee State University, a position he has held since Aug. 7, 2014.

Johnson was hired as a football strength & conditioning coach at ETSU in 2014, and in 2019 was promoted to Assistant Athletic Director for Football Performance. In his time, Johnson played a key role in preparing the student-athletes to getting back to competition as ETSU Football recommenced in 2015. Three years later, 2018, the Bucs claimed the program’s first-ever Southern Conference Championship, earning a bid into the FCS Playoffs.

Prior to arriving at ETSU, Johnson spent three seasons at Northwestern University as the Assistant Director of Sports Performance for football. Johnson has more than 30+ years of experience at the high school, collegiate and professional levels as a strength and conditioning coach. He spent 13 years with West Virginia and five years at Ohio State, coaching in 17 football and basketball postseason games. Johnson aided the Mountaineers to two runner-up BCS National Championship finishes. Johnson played an integral part of the 2002 Ohio State Buckeye national championship season.

Johnson is a regular speaker at local, regional and national conferences and clinics regarding strength, speed and conditioning topics, as well as motivation, leadership and team-building. Johnson also serves as a consultant for Nike Football Clinics, High Performance Nutrition, Training & Conditioning Magazine (Editorial Board). Coach Johnson still serves as an advisor with the CSCCA, a position that he has held since 2007.

Johnson is a graduate of Glenville State College, where he earned his undergraduate in Exercise Science and holds a Master’s Degree in Sport Management from West Virginia University.