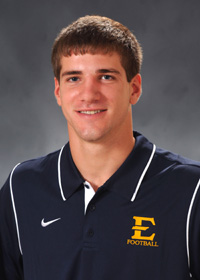 High School: Played both football and basketball at Unaka High School … set his school’s single season record for tackles and was earned the team’s “Tough Man” award in 2013 … averaged 17 tackles per game, while also rushing for an average of 120 yards per contest … was named all-conference and his league’s defensive player of the year … was selected to the FCA All-Star Team. Personal: Born May 6, 1995 … son of Rondal and Debbie Anderson … major is undecided … played for high school coach Steve McKinney.