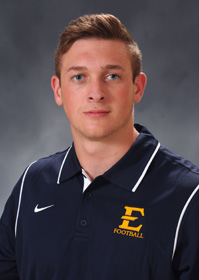 Played in the final 10 games of the season, while starting the final six … Finished with 52 tackles, two tackles for loss, one forced fumble and three quarterback hurries … Posted at least one tackle in all 10 games, including a season-high nine at Wofford (Sept. 24) … Had a tackle for loss against the Terriers … Seven tackles and one tackle for loss at Mercer (Nov. 5) … Forced a fumble in the win over West Virginia Wesleyan (Oct. 20).

Started all 11 games for the Bucs … Ranked second on the team in tackles (71) … Recorded at least one tackle in all 11 games, including a season-high 18 at Gardner-Webb (Nov. 14) … Finished with season bests nine solo and nine assisted tackles against the Runnin’ Bulldogs … Totaled four tackles (1.5 for loss) and a half-sack vs. Emory & Henry (Sept. 26) … Had seven tackles in his collegiate debut vs. Kennesaw State (Sept. 3), while adding nine tackles at Mercer (Oct. 17) … Earned three Bowman Jewelers Defensive Player of the Week honors (Kennesaw State, Mercer and Gardner-Webb).

Was a three-year letter winner at White County High School …. named district defensive most valuable player in 2012, while earning first team all-district honors during the 2013 season … collected a total of 253 tackles, was also rushing for 680 yards and five touchdowns during his prep career … was an honor roll student.