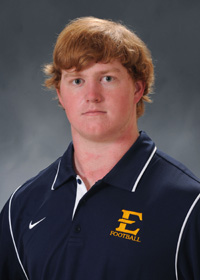 SoCon Academic Honor Roll member … Played in one game in 2015 … Made collegiate debut in win over Warner (Oct. 31).

Played four seasons at David Crockett High School … named to the FCA All-Star team … led his conference in sacks as a senior and was an All-Big 7 Conference Selection … was named team captain and was selected as defensive lineman of the year his senior season … had 32 tackles and 7 ½ sacks in 2013.