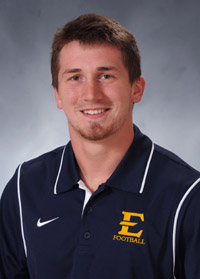 Transferred in from Mercer University and was a letter winner in football, soccer and basketball at Franklin Road Academy … had eight receptions for 72 yards at Mercer in 2013 …accounted for 108 receptions for 2,136 yards and 24 receiving touchdowns in high school, while also picking off 10 passes and scoring three defensive touchdowns … was the region offensive player of the year and an all-state selection in his senior year.