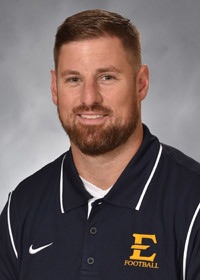 Kevin Shipley joined the ETSU football staff in 2013 as a Student Assistant for defense before moving to the offensive side of the ball in 2014 where he began working with the tight ends and fullbacks.

Shipley was officially hired to the staff to coach tight ends and fullbacks prior to the start of the 2015 season.

Shipley was a record-setting quarterback at Sullivan South High School in Kingsport, Tenn., and would go on to play for Phillip Fulmer at the University of Tennessee from 2001-2005.  He joined the Vols as a quarterback but moved to tight end after his sophomore season.

Before joining ETSU, Coach Shipley was the Recruiting Coordinator for D1 Sports Training; Chattanooga. There he was in charge of membership and position specific football training.  During his time at D1 Chattanooga, he worked with current NFL stars to develop training for NFL Combine Prep and High School to College Prep.  Throughout his tenure at D1, Shipley personally trained one NFL Draft Pick, two free agent signees and numerous current and past college players, which include ETSU Football standouts: Austin Herink and Austin Gatewood.

Kevin and his wife Haley reside in Kingsport with their cat, Neyland.