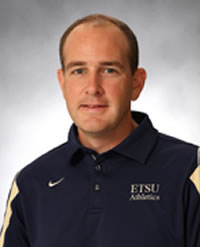 Brian is entering his thirteenth year at ETSU and primarily serves as the BucSports Clinical Director. A former graduate of the NATA approved Athletic Training curriculum, Brian has been associated with East Tennessee State University for several years.

After graduating from ETSU in 1998, Brian worked with Southeastern Sports Medicine in Asheville, NC and then at Greenwood High School where he taught Anatomy and Physiology and oversaw the schools athletic training needs. Brian rejoined the ETSU Athletic Training Staff in 2001 as the Assistant Athletic Trainer where he oversaw the Buccaneer Football team for three years. During that time, he assisted the sports medicine staff with the Pittsburgh Steelers in mini camp sessions. In 2003, Brian became the interim head athletic trainer and interim Clinic Director for the Jerry Robertson BucSports Athletic Medicine Center.

Brian serves as an athletic trainer for football while overseeing all functions of BucSports Athletic Medicine Center. He also has responsibilities for baseball, men’s golf, and women’s golf.

The Knoxville, Tennessee native received his Ph.D. in Sport Physiology and Performance in 2014 from ETSU (Dissertation:
Exploring the use of a jumps protocol as a return-to-play guideline following anterior cruciate ligament reconstruction). He received Masters in Sport Science Degree from the United States Sports Academy in 2002 and a Bachelor of Science in Physical Education with a concentration in Athletic Training in 1998. He is a certified instructor for CPR/AED for the Professional Rescuer. He is a member of the National Athletic Trainer’s Association, Southeastern Athletic Trainer’s Association, and Tennessee Athletic Trainer’s Society. Brian currently resides in Johnson City and is married to the former Sherri Saltys (ETSU ‘98) and have three children, Derek, Isaac, and Sam.