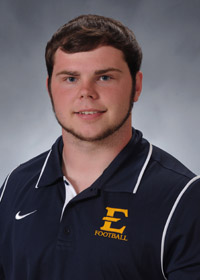 High School: Played both linebacker and fullback for four seasons at Elizabethton High School … won three conference titles and made two trips to the state semifinals with the Cyclones … was an all-conference selection as a junior and a senior … in his final two seasons at Elizabethton, he collected a total of 160 tackles while scoring a pair of touchdowns. Personal: Born April 10, 1995 … son of Lee and Armetia Woodby … major is undecided… played for high school coach Shawn Witten.