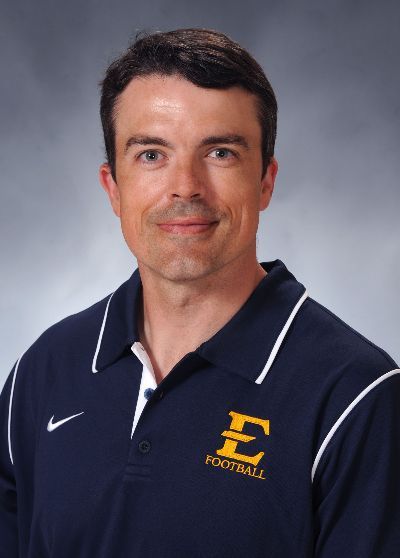 Mike Rader will begin his eighth season with the Bucs’ receiving core in the fall of 2022 as Coach Quarles retains him on staff to handle wide receivers.

The 2021 season was one for the record books as ETSU tallied a program record 11 wins, thanks in large part to a potent offense. The Bucs put together their best offensive production since the return of football in 2021, recording a program-record 5,319 yards of total offense, 32 rushing touchdowns, 425 points, 32.7 points per game and 53 total touchdowns in the fall season. Not to mention, ETSU saw the second-most yards per play (6.1) in a single season and second-most yards per game (409.2) in a single season, all under the watch of Rader.

Rader’s offense enabled the Bucs to claim their first outright SoCon title and the second title since 2018. The Bucs also earned a spot in the FCS Playoffs, claiming the No. 7 overall seed and opening the event with a second-round win over Kennesaw State.

Under the direction of Rader, the Bucs have spread the wealth at the receiver position in the seven-year span. Rader has seen 26 different wide receivers reign in at least one catch during their careers, while 15 different receivers have accounted for the 47 touchdowns by a receiver in seven seasons. In the Rader era, the Bucs’ receivers have accounted for a total of 806 receptions, 10,164 receiving yards and 47 touchdowns in 76 games played.

In the spring season, Will Huzzie and Malik Murray paced the Bucs with a combined 96 receptions, 1,179 yards and 10 touchdowns. Murray, a transfer from Georgia Southern, left his mark on the Bucs, while Huzzie continued his dominance that began in 2019. Huzzie now ranks 8th all-time in receptions (106) and 10th in receiving yards with 1,438. In the 2021 fall campaign, Rader oversaw Huzzie haul in the 6th-most receptions in a single season with 58 and the 10th-most receiving yards with 798. Both of those marks are the highest total by a receiver since football resumed in 2015. Huzzie now leads Rader’s receivers in career touchdowns with 10.

Rader has coached 27 All-SoCon honorees in the last four seasons as the offensive coordinator for the Bucs. Rader also coached Huzzie to the 2019 All-SoCon Freshman Team, the first wide receiver to receive a conference postseason honor since Cecil Moore in 2001.

His 2012 USA South Co-Champions produced 12 All-USA South performers and 14 league All-Academic honorees. Rader’s squad won their final three games with a defense that paced the league in four categories. Their offense boasted the league’s top rusher while averaging 211 yards per game on the ground. His creative offense finished the season averaging over 366 yards per challenge.