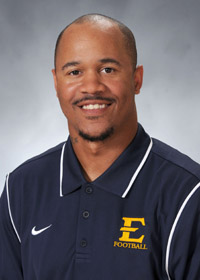 Chris Grimes, who enters his first season on the ETSU football coaching staff, will be in charge of working with the Buccaneer safeties.

During his time at Tennessee Tech, Grimes worked with all phases of its defense, primarily coaching safeties and nickels. In 2011, the Golden Eagles earned a share of the Ohio Valley Conference Championship after finishing 6-2 in league play.

At Levergne, Grimes helped guide the Wolverines to the 6A Playoffs for the first time in eight years, while the defense went from allowing over 40 points per game in 2013 to 20 points per game in his first season as coordinator. In addition, Grimes’ defense forced 37 turnovers.

Grimes played cornerback at Tennessee Tech from 2003-07, and appeared in 39 games while making 25 starts. The Golden Eagle recorded 158 total tackles, including 101 unassisted tackles from his cornerback spot. In addition, Grimes recovered seven fumbles during his career, caused two fumbles and broke up 16 passes. He had three career interceptions and finished with eight tackles-for-loss.

After graduating with a degree in multidisciplinary studies from Tennessee Tech, Grimes spent the 2008 season as a student assistant working with Taylor, coaching the inside linebackers. From there, Grimes served as an assistant coach at LaVergne High School in 2009, under head coach Will Hester. In that position, he coached the defensive backs and special teams.