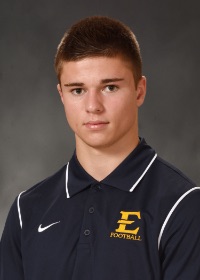 Named to the SoCon Academic Honor Roll … Played in 10 games (five starts) … Led the team in pass breakups (7) and was third in total tackles (62) … Posted a season-high 15 tackles at Gardner-Webb (Nov. 14) … Finished with a season-best seven solo tackles against Emory & Henry (Sept. 26) … Recorded tackles in all 10 games played, while finishing with at least five tackles in six games … Had two pass breakups against Gardner-Webb and Kentucky Wesleyan (Nov. 21).

Played both football and baseball during his prep career at Pickerington North High School and Fairfield Christian Academy … led team with four interceptions as a senior, while also making 37 tackles during the season … was an all-conference selection and was named a 2013 Quarterback Club Scholar Athlete honoree thanks to a 3.8 GPA.