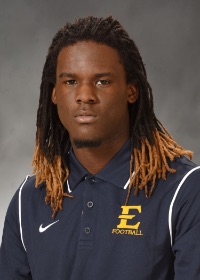 2015 (R-Freshman): Played in nine games, making six starts … Finished with 36 tackles (23 solo/13 assisted), one interception and one fumble recovery … Registered a season-high seven tackles and one interception at Gardner-Webb (Nov. 14) … Had a fumble recovery at Robert Morris (Nov. 7) … Totaled six tackles in each game against Kennesaw State (Sept. 3) and Charleston Southern (Sept. 17).

2014 (Freshman): Redshirted during his freshman season.

High School: Played at the 6A level at Mill Creek High School in Hoschton, Ga. … Broke multiple team records on the defensive side of the ball in both 2012 and 2013 … Led the state in interceptions during the 2012 season … Played for high school coach Shannon Jarvis.