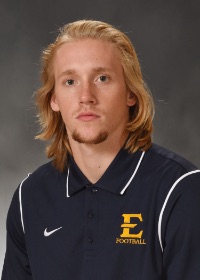 High School: Earned for letters while playing at Upperman High School, leading his prep team to a 13-1 record during his senior year … first team all-state pick and was a second team All-American selection by the Associated Press … led the TSSAA as a senior with 2,611 rushing yards as a senior and broke the TSSAA record for total touchdowns in a season with 72 – finishing with 134 career touchdowns … broke multiple records in high school, including national and state marks for offensive yards in a playoff game with 713 in a single contest … finished first in Tennessee and eighth in the nation with 5,135 total yards his senior year. Personal: Born July 27, 1995 … son of Steve and Donna York … expected to major in business … played for high school coach Ben Herron.