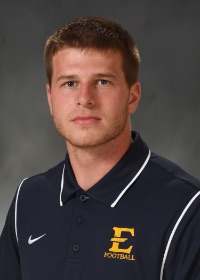 Played both football and basketball at Tennessee High School … set career records in most all major receiving categories, finishing with 150 receptions, 2,261 yards and 29 touchdowns during his career … collected 56 catches, 990 yards and 11 touchdowns his senior season … was an all-conference and all-state selection in football … participated in the Tennessee East/West All-Star Game.