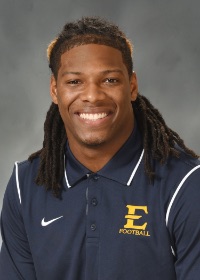 Played in eight games … Totaled 30 tackles, two for loss, and broke up two passes … Recorded at least one tackle in all eight games, including a season-best eight (four solo) at Mercer on Oct. 17 … Had four solo tackles in three straight games from Oct. 3-24 (Saint Francis, Mercer and Montana State).

Was a team captain while playing his prep football at South Pittsburg HS … helped lead his team to the Class 1A state championship game … was an all-district, all-state and Best of Preps selection in 2013 … participated in the Tennessee East/West All Star Game … gained over 2,500 career rushing yards on the offensive side of the ball, while collecting 200 career tackles on defense … he also had two career interceptions, three defensive touchdowns, five fumble recoveries and seven forced fumbles during his high school career.