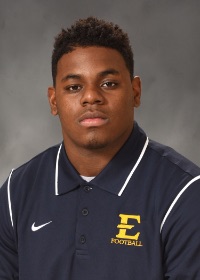 Played in eight games … Recorded 39 carries for 195 yards and one touchdown on the season … Finished with a season-high 77 yards at Montana State (Oct. 24) … Rushed for his first collegiate touchdown at Charleston Southern (Sept. 17) … His longest run of the season was 24 yards at Montana State … Had four carries for 30 yards, including a 23-yard run in his collegiate debut vs. Kennesaw State (Sept. 3).

Was a letter winner in football, basketball and track at Montgomery Bell Academy … holds high school track and field records … helped high school team to a 10-2 record in 2014.