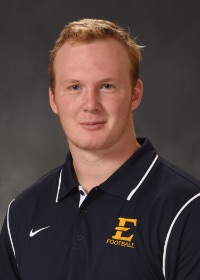 Started all 11 games for the Bucs on the offensive line … Started 10 of the 11 games at left tackle, while making one start at right tackle (Maryville) … Named Bowman Jewelers Offensive Player of the Week vs. Charleston Southern.

Played two seasons for former ETSU offensive lineman Wes Jones at Hardin Valley Academy … was an all-district selection as a junior, while earning all-region and all-Knoxville Football League status as a senior … collected 96 tackles his senior year, including 15 for loss, while catching 35 passes for 400 yards on the offensive side of the ball.