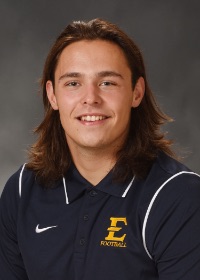 Played in four games for the Blue and Gold … Made ETSU debut in the Bucs’ win over Western Carolina at Bristol Motor Speedway on Sept. 17 … Had first reception as a Buccaneer at VMI – one catch for nine yards … Recorded one run and one reception versus Furman on Oct. 15.

Played at the University of the Cumberlands in 2014 … was a letter winner in football and basketball at Clinton High School … was a three-time all-district selection.