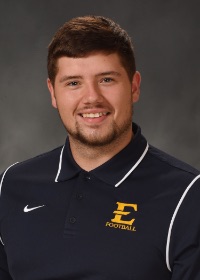 2018 (R-Senior): Played in six games for the Bucs, including the final five games of the season … Made season debut against Gardner-Webb … Helped block for the ETSU rushing unit to eclipse 200 yards in three of his six games, including 247 yards on the ground against Western Carolina (Oct. 27).

2017 (R-Junior): Played in all 11 games, making 10 starts for the Blue and Gold … Scates’ blocking duties helped the Bucs post a pair of two-touchdown rushing games – wins over Mercer and VMI … Helped block for Austin Herink to break the single-game passing record of 434 yards at Furman on Sept. 30.

2016 (R-Sophomore): Played in all 11 games, making one start … Made first collegiate start at The Citadel (Oct. 29) … Primarily used on special teams.

High School: Played four years at Fulton High School, where his team won back-to-back state championships in 2012 and 2013 … Was an all-district, all-KIL, and all-state selection … Competed in both the Tennessee/Kentucky All-Star Game and the Tennessee East/West All-Star Game.