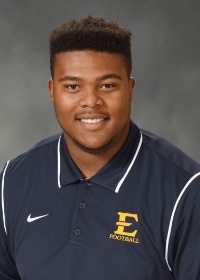 2018 (Senior): Named to the SoCon Honor Roll … Named to the SoCon Fall Academic Team … Appeared in 11 games with four starts on the campaign … Concluded the season with 11 tackles, including two solo, while also finishing with one quarterback hurry … Tallied a season-high four tackles against The Citadel on Oct. 13.

2017 (Junior): Named to the Socon All-Academic Team and SoCon Honor Roll … Started all 11 games for the Blue and Gold … Totaled 33 tackles and two quarterback hurries on the season … Had a season-high seven tackles vs. No. 8 Wofford … Added six tackles (two solo) against The Citadel and six tackles at Furman … Had three tackles (half tackle for loss) at No. 1 James Madison.

2016 (Sophomore): Named to the 2016-17 SoCon Honor Roll … Started all 11 games for the Blue and Gold … Recorded 27 tackles, two tackles for loss, one fumble recovery and one quarterback hurry on the season … Registered at least one tackle in all 11 games … Three solo tackles in the Bucs’ season-opening win at Kennesaw State … Four tackles each at Wofford (Sept. 24), VMI (Oct. 8) and Cumberland (Nov. 12) … Four tackles (1.5 TFL) in the win over Cumberland, while adding three tackles in the season-ending win over No. 18 Samford on Nov. 19.

High School: A three-year letterman at Northwestern High School … His team won the state title in 2013 … Was named both all-state and all-region in 2013 for South Carolina’s Division 4A … Participated in 2014 Shrine Bowl of the Carolinas.