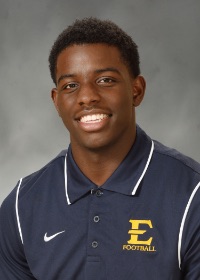 Was a three-sport athlete at Riverside Military Academy, earning letters in football, basketball and track … was an all-area selection as a junior and senior … was picked his team MVP in 2015 and team Most Improved Player in 2014 … was an all-area performer in basketball and baseball as well … collected over 2,000 all-purpose yards during his career.