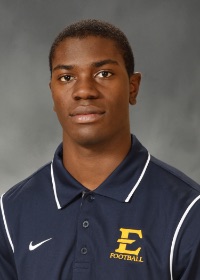 High School: Was a two-sport athlete at Green Hope High School, playing both football and running track … averaged 7.1 tackles a game in his senior season … was named to the Max Emfinger 2014-15 Super Stars Under the Radar List … set his school record in the 55-meters with a time of 6.84 his senior year, and was also a member of a record setting 4X200 and 4X400 squad ... Earned All-American honors as a member of the Sprint Medley squad that finished US #6 at the 2015 New Balance Indoor Nationals. Personal: Born June 17, 1996 … son of Fields and Cheryl Jackson… major is Pre-Med … played for high school coach Kwame Dixon.