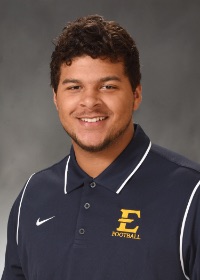 2017 (R-Sophomore): Appeared in 11 games on the season with four tackles … Finished with three solo tackles and added one sack on the season.

High School: Played his senior season at Alpharetta High School … Helped lead his team to a school record for wins and posted the school’s best record ever … The team made its furthest advancement in the playoffs in school history … Had 30 solo tackles, three sacks and eight tackles for loss as a senior.