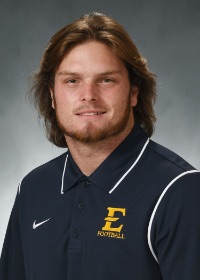 High School: Was a four-year letter winner at Knox Catholic High School … earned all-district and all-region honors as a sophomore, junior and senior, while being selected all-state his junior and senior seasons … played in the East/West All-Star Game … was a team captain his senior year … finished his career with 316 total tackles and 29 tackles for loss … he also rushed for over 1,300 yards and had 1,000 reception yards as a fullback, scoring 27 touchdowns for his career. Personal: Born April 19, 1996 … son of Rick and Angela Lacey … major is undecided … played for high school coach Steve Matthews.