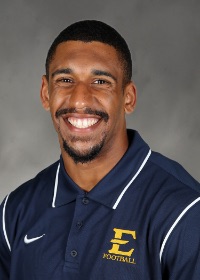 SoCon Academic Honor Roll member … Played in 10 games for the Bucs … Totaled seven tackles on the season … Had a season-high two tackles at Gardner-Webb (Nov. 14) … Recorded a tackle in his ETSU debut vs. Kennesaw State (Sept. 3).

Will join the Bucs after spending one season at Georgia Military College and played his high school football at Charlotte County Day … was named Georgia Military’s Defensive Player of the Year in 2014 … was a two-sport standout in track and football during his high school career, serving as a team captain for both squads … was an all-state and all-conference in both sports … played in the North Carolina/South Carolina All-Star Game.