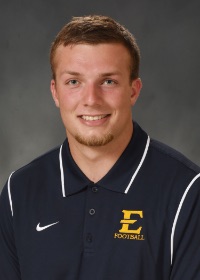 Made his collegiate debut in ETSU’s win against West Virginia Wesleyan (Oct. 20), where he recorded one pass attempt.

A two-sport standout in football and basketball at Sullivan South High School … selected to the Class 4A all-state team and was named conference player of the year as both a junior and senior … named MVP of the Tennessee/Kentucky Border Bowl Game … for his career, he finished with 5,100 passing yards and threw for 64 touchdowns, along with 1,794 rushing yards and 26 rushing touchdowns … finished with school records for TD passes in a game (6), in a season (34), career (66), touchdowns accounted for in a season (48) and career passing yards (5,100).