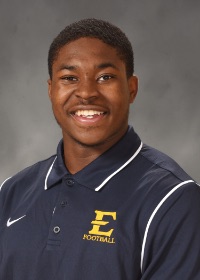 High School: A three-sport standout at Christ Church Episcopal School, where he participated in football, basketball and track … his team won back-to-back state titles in 2011 and 2012 … was named both the All-State Player of the Year and the All-State Offensive Player of the Year for South Carolina’s Division 1A … was also an all-region pick. Personal: Born March 13, 1996 … son of Robert and Miriam Anthony … expecting to major in engineering … played for high school coach Dan Frost.