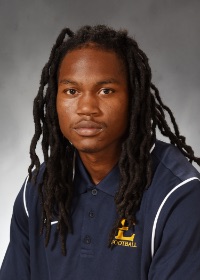 Started all 11 games … Totaled 31 tackles (18 solo/13 assisted) and led team with two interceptions … Had interceptions against Maryville (Sept. 10) and Kentucky Wesleyan (Nov. 21) … Finished with a season-high eight tackles (six solo) against Saint Francis (Oct. 3) … Had three tackles and a forced fumble at Robert Morris (Nov. 7) … To go with his INT vs. Maryville, also had five tackles and pass breakup … Totaled five tackles at Gardner-Webb (Nov. 14).

Played two seasons at Snow College before transferring to ETSU ... Named one of the top JUCO recruits by ESPN ... 3-Star recruit according to Rivals and 247 Sports ... Tabbed Western States Football League all-conference honorable mention in 2014 ... Finished with 25 tackles (14 solo) and two interceptions for the Badgers in 2014 ... Tallied five tackles and had an 89-yard interception return for a touchdown in a 42-6 win over Phoenix on Sept. 27 ... Recorded five tackles and recovered a fumble in a 73-6 win over Pima on Oct. 18 ... Multi-sport athlete at Arlington High School where he lettered in football and track and field for the Tigers ... Finished with 11 interceptions in his final two seasons at Arlington.