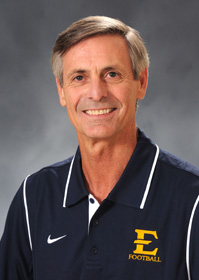 O'Cain has helped the Bucs lay a solid foundation to restarting the football program as ETSU went from posting two wins in its first season back in 2005, to finishing with five wins in 2016 - including victories over Kennesaw State, Western Carolina at Bristol Motor Speedway and No. 18 Samford.

In 2016, O'Cain's offense was one the tops in FCS in red zone offense as the Blue and Gold converted on over 90-percent of their chances, which ranked fifth nationally. In addition, ETSU ranked third in fewest fumbles lost (2) and 22nd in fewest passes intercepted (8). Holding onto the football was key for the Bucs in 2016 as they didn't turn the ball over in five of the 11 contests, while only turning the ball over once four times. ETSU used a balanced attack in the 20-17 double-overtime win at Kennesaw State in the 2016 season opener as the Bucs threw for 214 yards and rushed for 106, while following that up with 474 yards of total offense two weeks later in the 34-31 win over Western Carolina at Bristol Motor Speedway. Following the win, redshirt sophomore quarterback Austin Herink was named Southern Conference Offensive Player of the Week after passing for a career-high 269 yards and three touchdowns over the Catamounts. The Blue and Gold registered over 400 yards of total offense two more times in the 2016 season as ETSU accomplished the feat in the 38-7 win over West Virginia Wesleyan and 23-16 victory over Cumberland. Against WVWC, 323 of the 421 yards came on the ground, marking the most rushing yards since restarting football in 2015, while finishing with 401 yard (238 rushing) against Cumberland.

A veteran of the Atlantic Coast Conference, O’Cain was the offensive coordinator at both North Carolina and Clemson. He has also coached in 19 bowl games during the course of his time with these teams.

O'Cain began his coaching career as a graduate assistant at Clemson in 1977. He then coached the offensive backfield at The Citadel between 1978-80, before moving to Murray State where he was an assistant under future Virginia Tech head coach Frank Beamer from 1981-84.

After a one-year stint as the assistant head coach at East Carolina, he joined the N.C. State Wolfpack as a quarterbacks coach. O'Cain was the top assistant under Dick Sheridan from 1986-92 and helped lead the 'Pack to six bowl game appearances. In 1993, after Sheridan retired, O'Cain was named head coach and became the second coach ever in N.C. State history to lead his team to a bowl game in his first two seasons.

After notable wins verses No. 1 Florida State and Texas in 1998 and 1999, O'Cain became North Carolina's offensive coordinator and quarterbacks coach for one year. He then moved to Clemson to take the quarterbacks coach role until 2004.

During his time at Virginia Tech, O'Cain turned Logan Thomas into a competitive college quarterback. In his first year working with the new quarterback, Thomas broke the school's single-season record for total offense and became just the second 3,000-yard passer in school history.

He nurtured Tyrod Taylor over the preceding four years, helping him become a versatile dual-threat quarterback who eventually was drafted by the Super Bowl champion Baltimore Ravens.

Prior to Virginia Tech, O'Cain coached at Clemson serving as the offensive coordinator and quarterbacks coach. He was instrumental in the guidance of another future NFL quarterback, Charlie Whitehurst, who established 33 school records, including passing yardage and completions for a season.

A native of Orangeburg, S.C., O'Cain was a three-year letterwinner at Clemson, where he was the most valuable player and a captain of Clemson's 1976 team, working as both the punter and quarterback. He is still ranked in Clemson's history for passing efficiency. He received his bachelor's degree in recreation parks administration from Clemson in 1977.