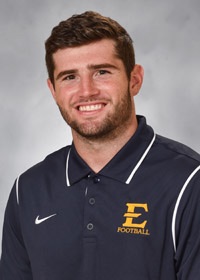 Transferred to ETSU from Stetson … Two-year team captain with the Hatters … Recorded 221 tackles (142 solo/79 assisted), 12.5 tackles for loss, one sack, nine interceptions, 16 pass breakups, five quarterback hurries, seven forced fumbles and two fumble recoveries in 34 games at Stetson … Recorded 63 tackles (47 solo) and three interceptions in 2015 … Had a two-interception game against Ave Maria (Nov. 14, 2015) … Had eight tackles (seven solo) and one interception vs. Campbell (Oct. 17, 2015) … Tied for second on the team with four INTs and ranked third with 76 tackles in 2014 … Had a season-high 13 tackles in the game against Mercer (2014) ... Also had 12 tackles in the win at Campbell (2014)... Sealed that victory with an interception on the goal line in the closing seconds of play ... Was named team defensive player of the week for his performances against San Diego and Davidson (2014)... Was selected as team Special Teams Player of the Week three times in 2014 ... Also earned the team "Big Hit" award for a play against Butler in 2014 ... Was a 2014 honorable mention All-PFL selection ... Was named to the 2014 PFL Academic Honor Roll … Finished second on the team with 82 total tackles, including 56 solo stops in 2013 ... Led the nation with six forced fumbles in 2013 ... Was named Pioneer League co-Special Teams Player of the Week for his performance against Jacksonville (Nov. 16, 2013) which included blocking a punt for a 28-yard touchdown ... He also had nine solo tackles and forced two fumbles in the game ... Was selected by Phil Steele Publications as a third team Freshman All-American (2013).

Played football and lacrosse at Jupiter Christian before spending a post-graduate year playing both sports at Proctor Academy in Andover, NH ... Helped Jupiter Christian to a pair of state titles (2009-10) ... Was a second team All-County and All-Area pick as a junior ... Earned first team All-County, All-Area and All-State as a senior, recording 121 tackles with two interceptions and nine pass breakups ... Earned first team All-New England in lacrosse and football as a post-graduate, earning Northern New England Player of the Year honors in lacrosse ... Was an All-American and first team All-State as a senior in lacrosse.

Full name is Ryan Patrick Powers ... Was born on April 22, 1993, in Jupiter ... Is the son of Colleen and William Powers ... Has one brother, William, and one sister, Lindsey ... His brother was a running back at Princeton ... Is a General Business major.