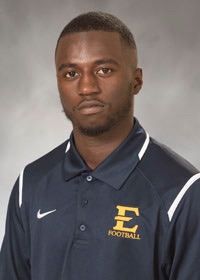 2018 (Senior): Played in 10 games for the Blue & Gold … Finished the season with 26 tackles (19 solo) and one interception … The interception came in his first game of the season against VMI on Sept. 14 … Concluded the year with 68 all-purpose yards, including nine punt returns for 58 yards … Capped off his senior year with 0.5 sacks and four pass breakups … Tallied a season-high 11 tackles against Chattanooga on Sept. 29, including eight solo.

2017 (Junior): Played in 10 games, making two starts … Registered 13 tackles (nine solo) and one interception (returned for a touchdown) on the season … Recorded his 33-yard interception return for a score at then-No. 1 James Madison (Sept. 9), marking the Bucs’ first return for a touchdown since Nov. 15, 2003, when Allen Davis returned a pick 90 yards in a home win over Chattanooga … Season-high five tackles in the win over Mercer on Sept. 23.

2016 (Sophomore): Played in nine games for the Buccaneers … Led the Blue & Gold with 472 kickoff return yards (23 returns), which ranked third among Southern Conference players … Totaled 111 return yards on five returns, including a season-best long of 42 at The Citadel (Oct. 29) … Recorded 16 tackles and one pass break up … Finished with six tackles (five solo) in the win over West Virginia Wesleyan (Oct. 20) … Earned Bowman Jewelers Special Teams Player of the Week for the VMI game on Oct. 8.

2015 (Freshman): Played in all 11 games … Ranked ninth in FCS in combined kickoff return yards (850) … Broke ETSU’s single-season kickoff return record with 850 yards … Recorded 42 kickoff returns, while posting 15 tackles, one interception and one pass breakup on defense … Had a season-best 174 kickoff return yards against Saint Francis (Oct. 3), including his longest of the season (43 yards) … Registered a season-high eight tackles (five solo) in the win over Kentucky Wesleyan (Nov. 21) … His interception came in the win over Warner on Oct. 31 … Earned a pair of Bowman Jewelers Special Teams Player of the Week Honors (Charleston Southern and Saint Francis).

High School: A three-sport standout athlete at West Mecklenburg High School, playing football, baseball and basketball … Earned all-conference honors for four seasons and was an all-county pick as a senior in football … Had 21 interceptions and over 2,000 career return yards in high school … Was also an all-conference pick in baseball and basketball, even setting a school record for stolen bases.