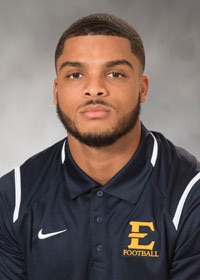 Played in eight games, making four starts in his first season at ETSU … Ranked third on the team in receptions (21) and receiving yards (205) … Also posted 24 rushing yards on seven attempts, while registering two kickoff and punt returns … Recorded his first collegiate touchdown in the Bucs’ win over Western Carolina at Bristol Motor Speedway (Sept. 17) … Finished with a season-high five receptions (also three rushes for 17 yards) against the Catamounts … Posted a season-best 54 receiving yards at VMI (Oct 8).

Transferred to ETSU from Old Dominion ... Played in 21 games with seven starts in two seasons for the Monarchs … Lined up at both wide receiver and running back at ODU … Recorded 29 receptions for 186 yards and 11 rushing attempts for 36 yards in two seasons at ODU … Ranked as a 3-Star recruit by 247Sports.com coming out of high school, where he was also recruited by East Carolina, Massachusetts and Charlotte … Rushed for 936 yards and 10 touchdowns as a sophomore at Grassfield High School … Had kick returns of 99 and 86 yards for touchdowns for the Grizzlies … Ranked as the No. 19 all-purpose back in the country by 247Sports.com.