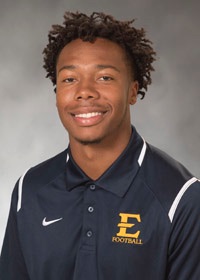 2019 (R-Junior): Named to the SoCon Honor Roll … Appeared in five games for the Bucs, including two starts on the season against Appalachian State (Aug. 31) and Shorter (Sept. 7) … Finished the season with seven catches for 137 … Hauled in a career-long 44-yard reception against Samford (Oct. 26) … Recorded a season-best four catches for 77 yards against the Mountaineers.

2018 (R-Sophomore): Named to the SoCon Honor Roll … Appeared in nine games with five starts on the season … Made first collegiate start in the season-opening win over Mars Hill on Sept. 1 … Finished the year with 22 receptions for 291 yards … Posted a career-high 10 receptions for a career-best 82 yards against Mercer (Nov. 3) … Had four catches for 68 yards against Western Carolina on Oct. 27, including a career-best 36-yard reception … Pulled down at least one catch in six of the nine games played.

2017 (R-Freshman): Played in 10 games for the Blue and Gold … Totaled 16 receptions for 109 yards, while adding two rushing attempts for five yards … Recorded in his first collegiate reception and rushing attempt in the season-opening win over Limestone on Sept. 2 … Had two receptions for 12 yards and one carry for four yards vs. the Saints … Posted four catches for 44 yards, including a long of 33 in the overtime win over Mercer on Sept. 23 … Had three receptions each against Furman and Western Carolina.