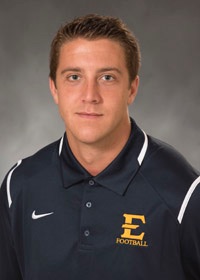 Named SoCon Academic Honor Roll … Named Bowman Jewelers Offensive Player of the Week vs. Mercer … Played in all 11 games … Split time at quarterback … Was 43-for-93 with 555 yards and one touchdown passing, while rushing for one touchdown … Threw for a season-high 111 passing yards at Montana State (Oct. 24) … Combined for 221 passing yards in back-to-back games at Mercer and Montana State … Had six rushing attempts for 30 yards, while passing for 71 yards and one touchdown vs. Maryville (Sept. 10).

Played four seasons at Seymour High School, where he was also a three-sport athlete in football, basketball and track … was a first-team All-IMAC selection for two years at quarterback.