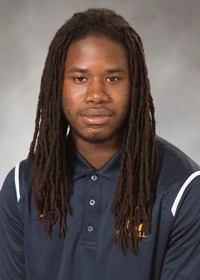 Played in nine games, making eight starts for the Blue and Gold … Recorded 29 tackles (23 solo), three tackles for loss, one sack, two forced fumbles, one fumble recovery and four pass break ups … Finished with four tackles, one tackle for loss and forced fumble in the season-opening win at Kennesaw State (Sept. 3), while following that up with another four-tackle game (one sack) and forced fumble in the Bucs’ win over Western Carolina at Bristol Motor Speedway on Sept. 17 … Had an 87-yard fumble return against Chattanooga on Oct. 1, marking the longest fumble return in program history … Season-high seven tackles in the win over Cumberland on Nov. 12 and added three solo tackles in the win over No. 18 Samford on Nov. 19 … Named Bowman Jewelers Defensive Player of the Game against Western Carolina, Effort Play of the Game vs. Chattanooga and Impact Play of the Game at Kennesaw State.

Transferred from Rochester Community & Technical College, where he was an all-state and all-conference selection … had 26 tackles, four interceptions and seven pass breakups in during his junior college season … a two-sport standout at Manatee High School, where he participated in football and track … his team won the 7A state title in 2013 … was named defensive back of the year at Manatee High School.