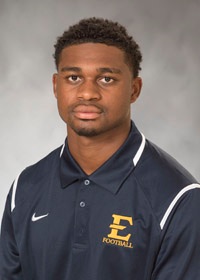 Played in all 11 games for the Buccaneers as a freshman … Made collegiate debut in ETSU’s season-opening win at Kennesaw State on Sept. 3, while recorded his first collegiate tackle at Wofford on Sept. 24 … Finished with a season-high three tackles against the Terriers … Overall, finished with eight tackles (four solo) on the season … Two tackles at The Citadel on Oct. 29.