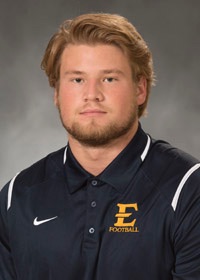 Son of Jennifer and Chris Howard … Plans to major in Pre-Nursing.