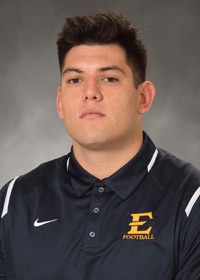 Made 10 starts for the Bucs in his first season and helped bolster ETSU’s offensive line after transferring from Pima Community College. Rios split time at both tackle positions and earned team MVP honors for his effort against Chattanooga where he graded out at 83 percent with a pair of knockdowns. Rios’ blocking duties helped ETSU total three 200-plus yard rushing games – including a season-high 323 yards in the win over West Virginia Wesleyan.